The movie Santa with Muscles ( "Hulk" Hogan, 1996) starts out with Hogan, as an evil millionaire, and his buddies going out for a paintball game in the Desert. 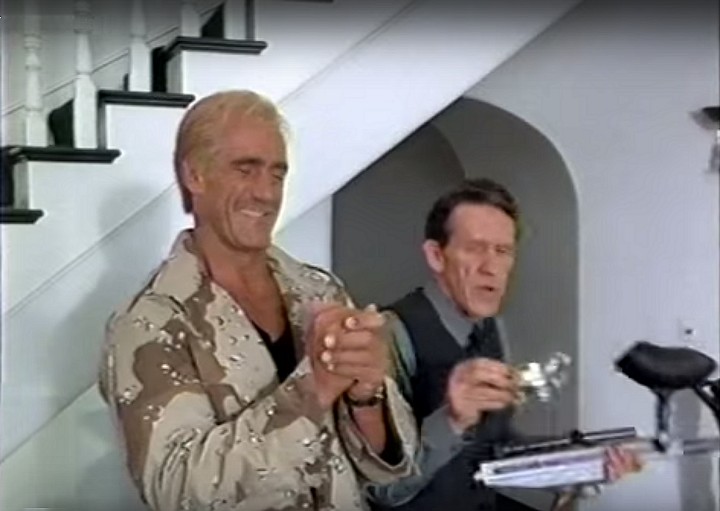 After starting his day fighting with his hired goons, jerkwad health-supplement tycoon Blake ("Hulk" Hogan) decides it's time
for he and his buddies to go play some paintball. His butler Pierre (Pierre Dulat) begins preparing a Brass Eagle "Golden Eagle"
semiautomatic paintball gun, with a Viewloader VL200, and a Crosman pellet rifle telescopic sight. 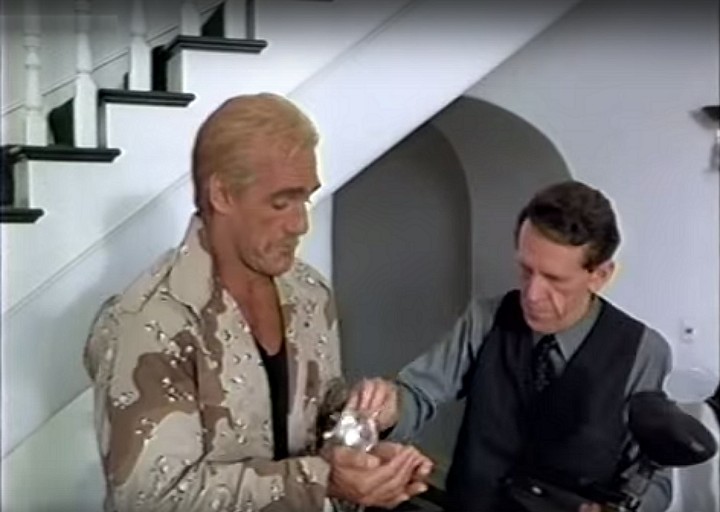 Pierre first hands Blake a small handful of what are presumably paintballs- although they make clinking noises- out of a
small silver creamer from a tea set. 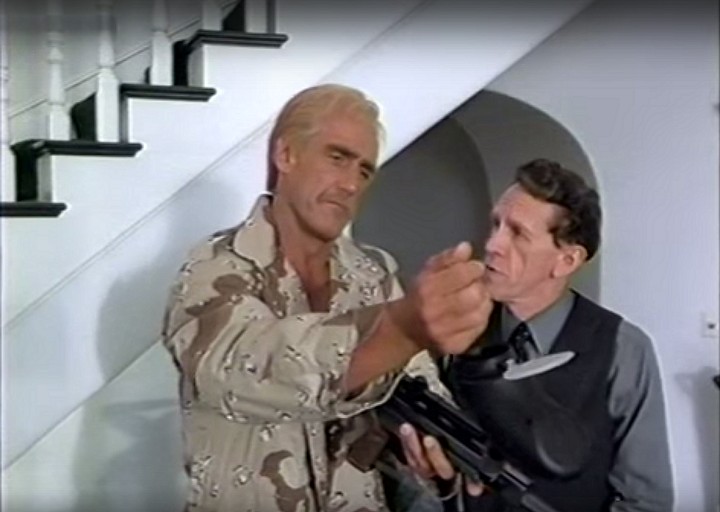 Blake then drops the paintballs into the hopper, while Pierre discusses the days business with him. 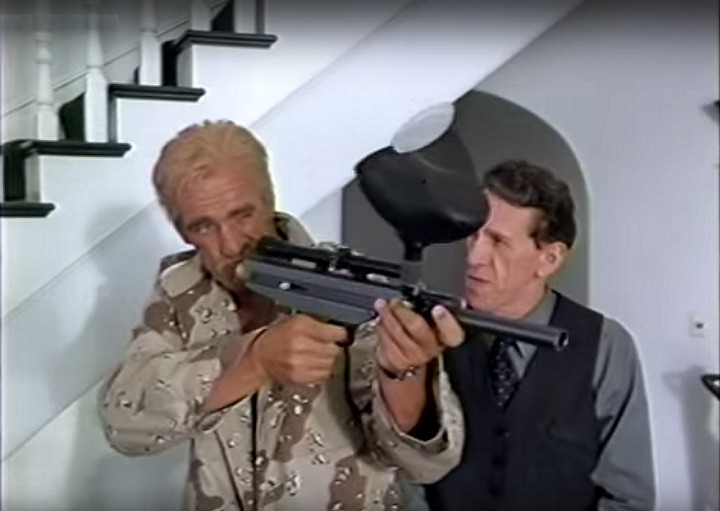 Without even closing the lid on the hopper, Blake then takes a quick practice sight. Note the marker has no air tank. 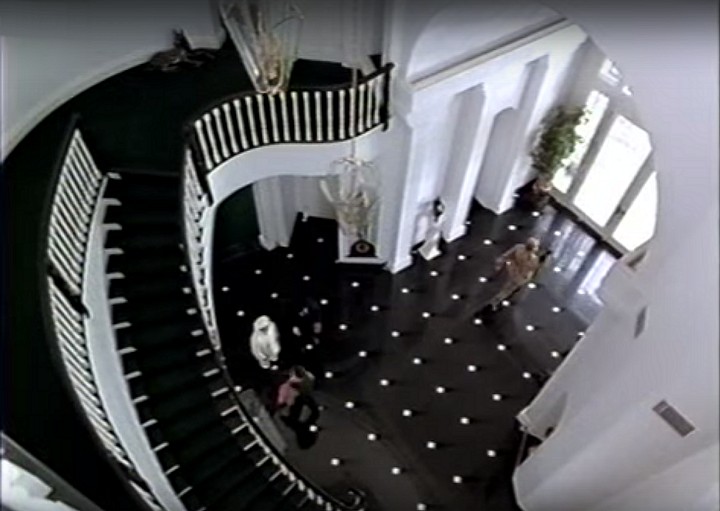 "Kay, guys, let's go kick some paintball butt!" as he strides out the front door. 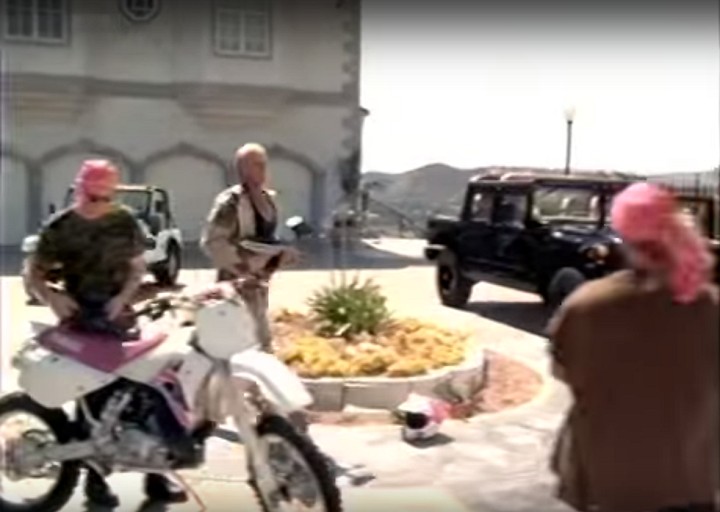 Out in the driveway, we find several of his buddies, tending a couple motorcross bikes, a Jeep CJ, and a Hummer. 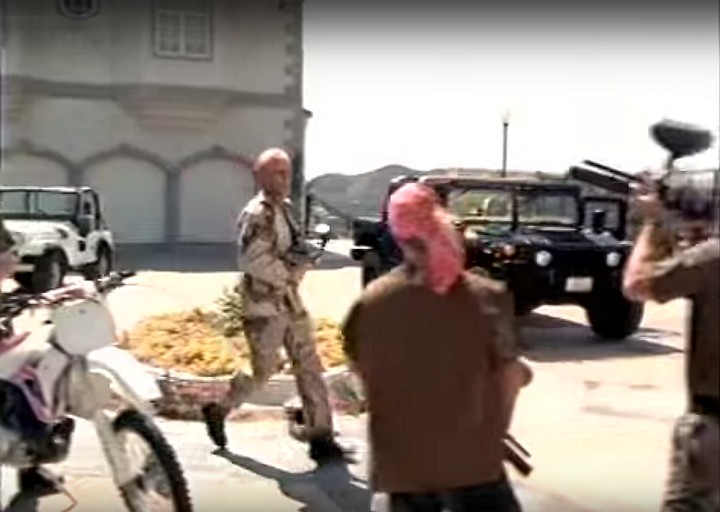 Three of whom are standing around waiting for Blake, each holding a Sheridan VM-68. Note the marker at the
far right has the tank mounted directly under the barrel. 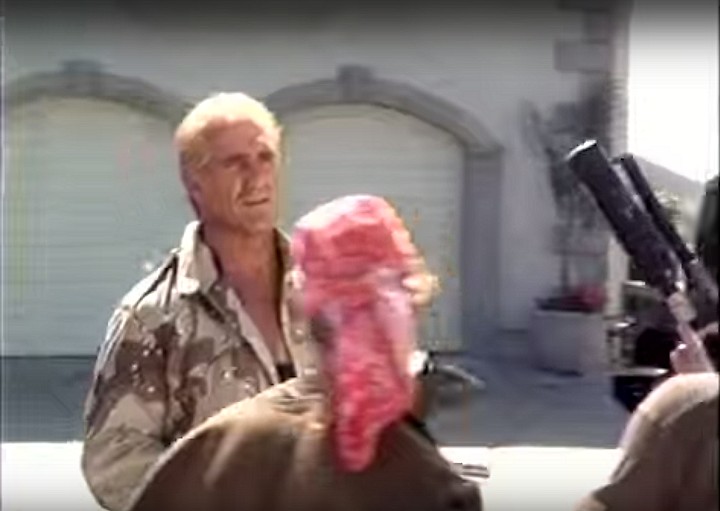 A slightly better shot of the VM-68, showing it's a well-worn example, probably an ex-rental. 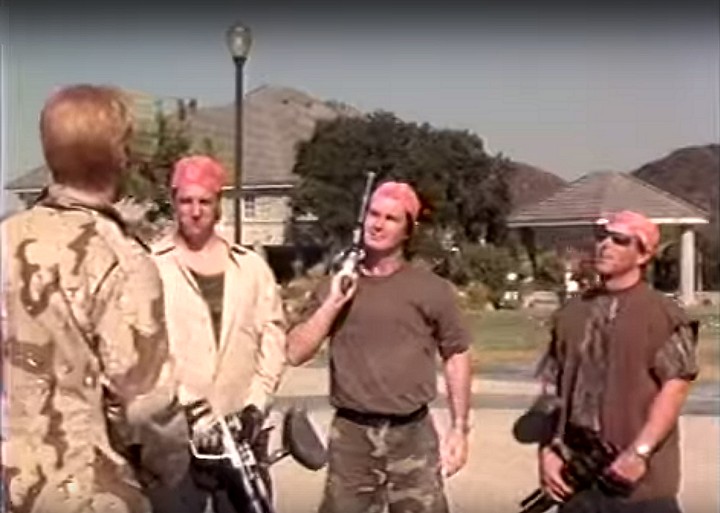 Here we can see the distinct vertical lines of the factory VM-68 "camoflage" anodizing on both the left and right ahnd markers.
Both also appear to be sporting APP "Sight Feeder Commander" 300-round loaders. 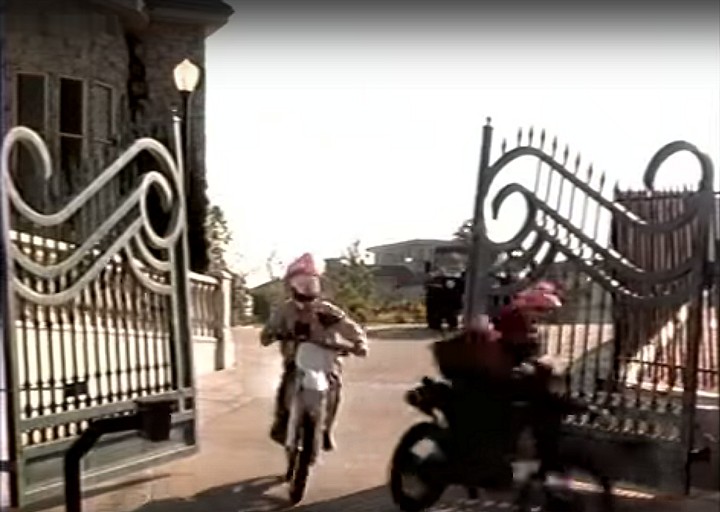 With nothing more than "Let's roll!" as a greeting, they all mount up on the bikes and trucks, and head for the desert.
Note the guy on the white bike has his marker strapped crossways on his handlebars, with the loader in the center. 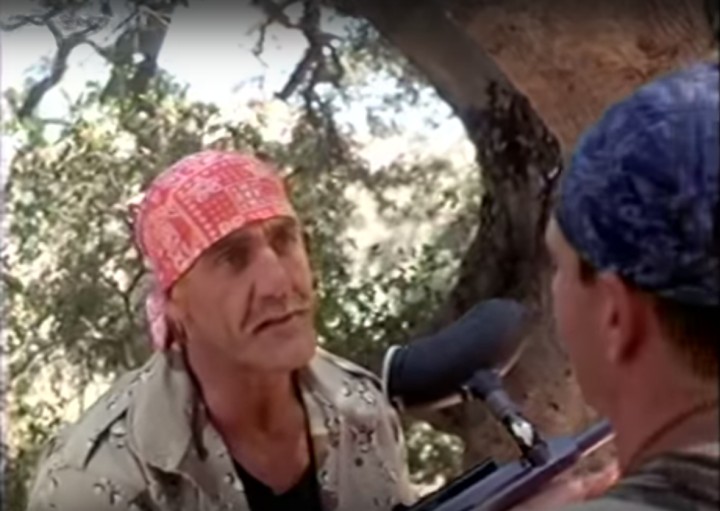 Once at the playing area, where they apparently meet up with even more players, Blake tries to explain the rules to one of the blue players. 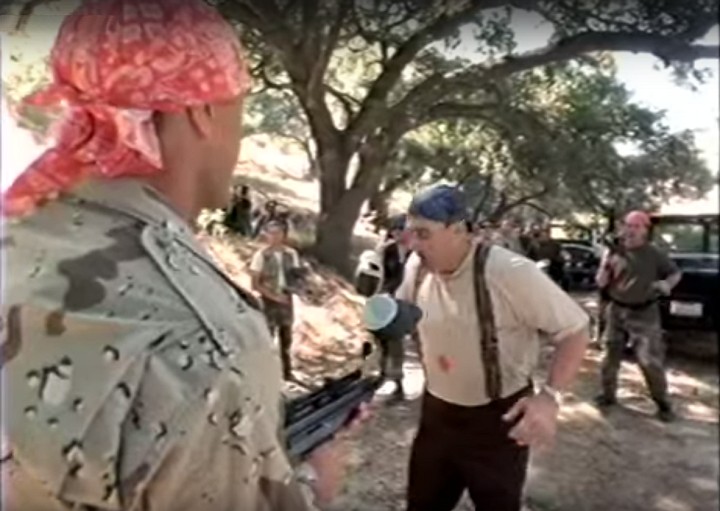 And then shoots him at point blank range. "Never trust the enemy, captain!" 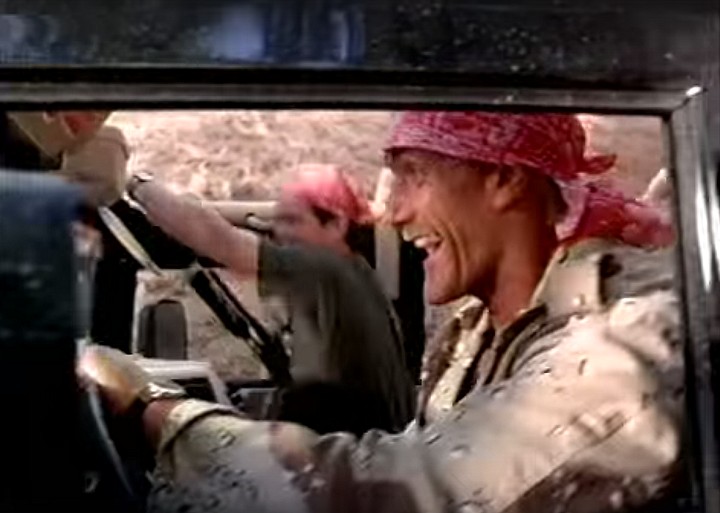 For whatever reason, immediately thereafter, they get back in the cars and go blasting down the road.
Is this game played on the highway? 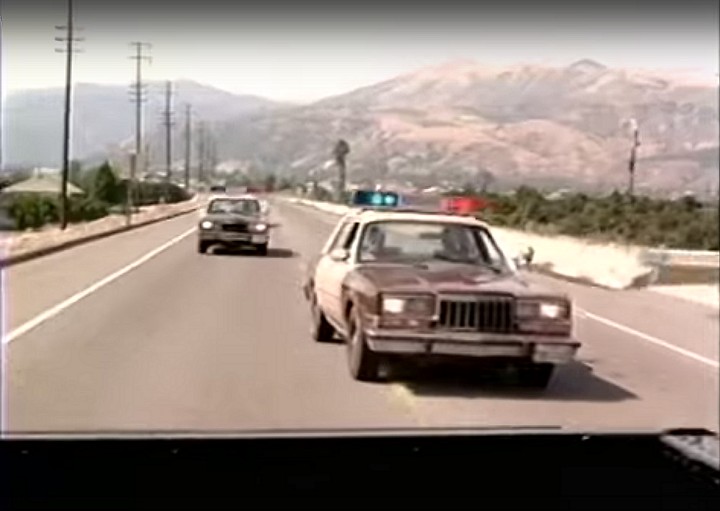 As they're blasting along, the pass a police officer parked at a speed trap, who follows in pursuit and calls in for backup. 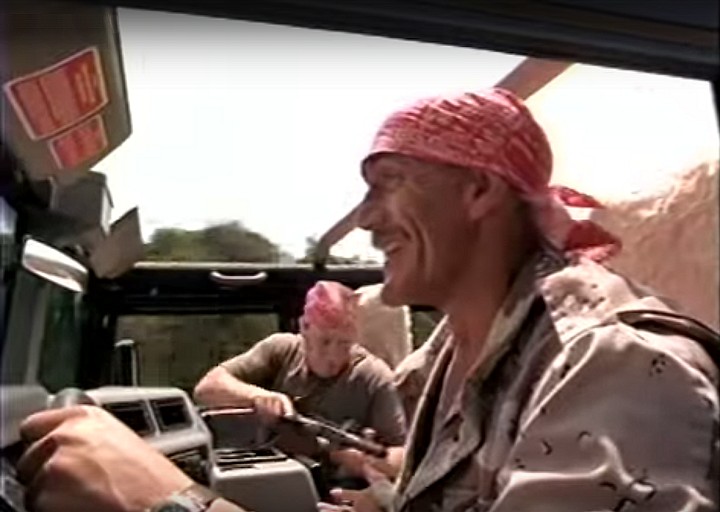 "Why don't you just pull over?" "Rule number 20: Never surrender. Besides, this is fun! Gimme your paintgun!" 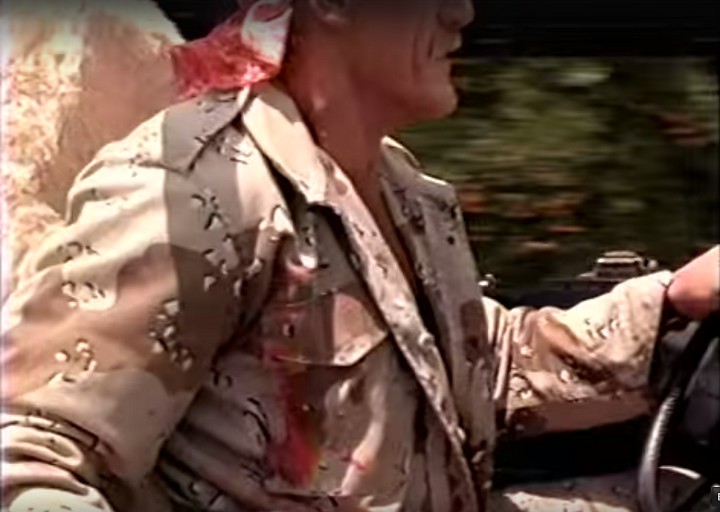 As his passenger pickes up the Golden Eagle, he accidentally shoots Blake. 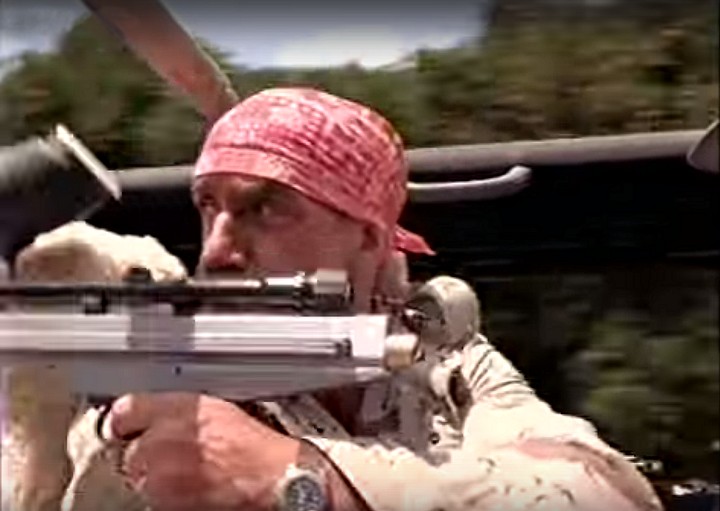 Blake takes it from him ("Idiot!") and turns to fire a shot at the pursuing officer. Again, despite the marker has no air tank. 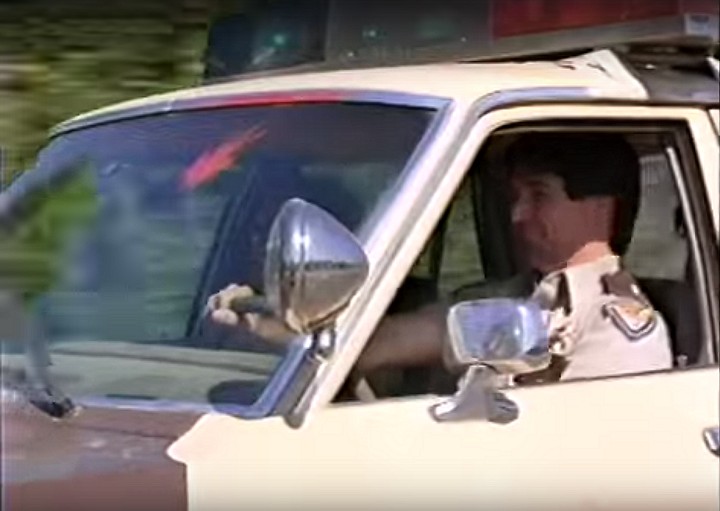 Blake scores a hit on the officers windshield. 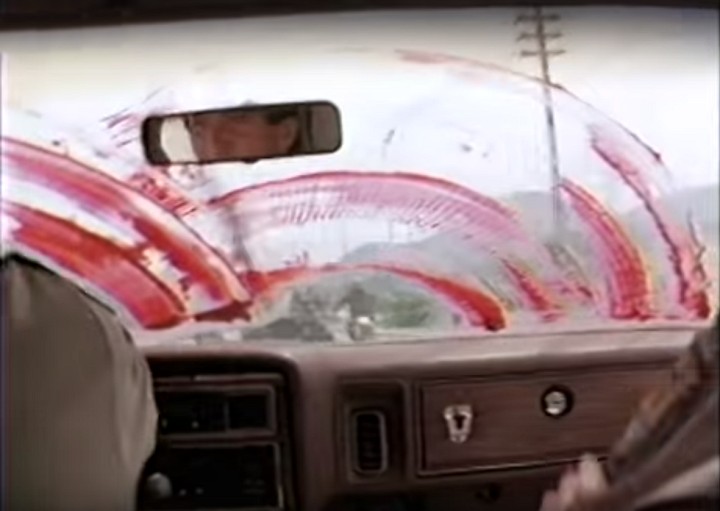 After several more, the officer tries to clear the hits with his wipers. 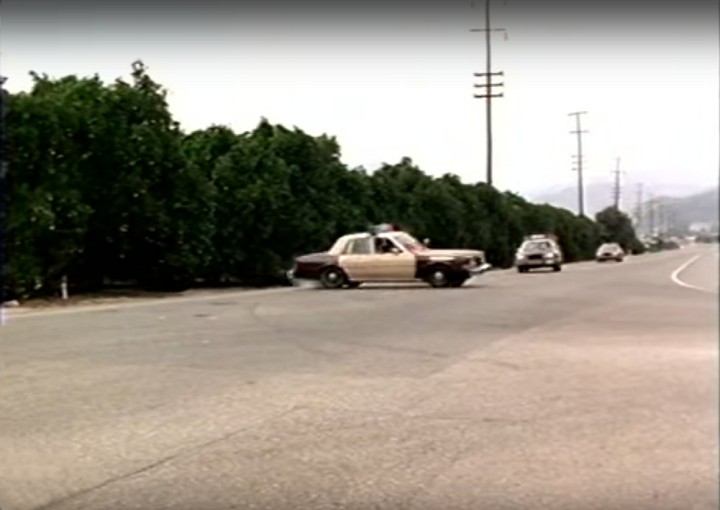 With his windsheild smeared with paint, he almost loses control of his car, sliding to a stop and forcing the other officers
to swerve around him. Blake then drives to a nearby mall to get away.