(Adventures with Bill segments are always filmed in black-and-white.) 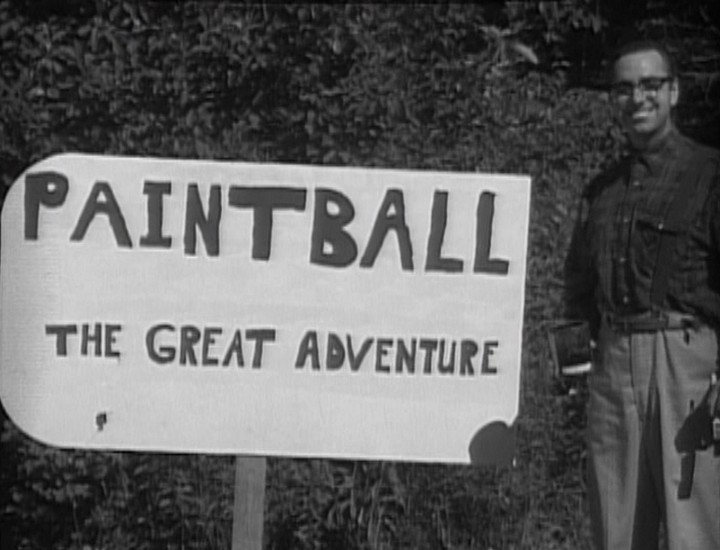 This segment opens with Harold Green (Patrick McKenna) who has just finished painting a sign for the new paintball field. 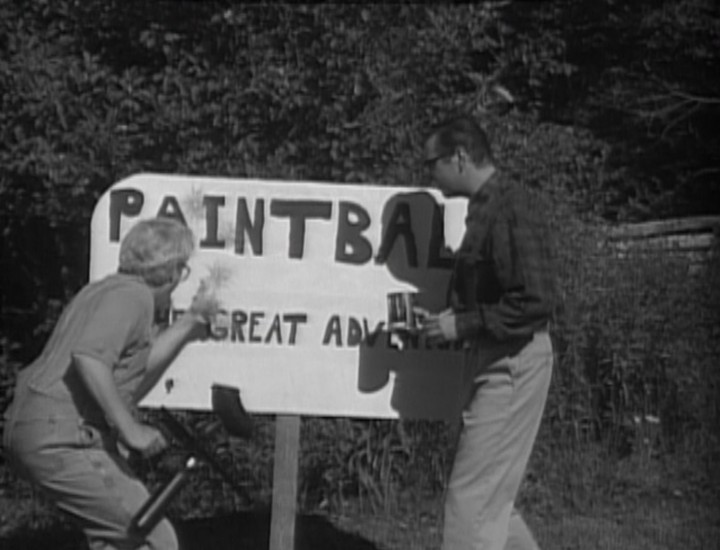 Just moments later, the sign is shot several times, and Bill, (Rick Green) paintgun in hand, rushes up to admire his handiwork. 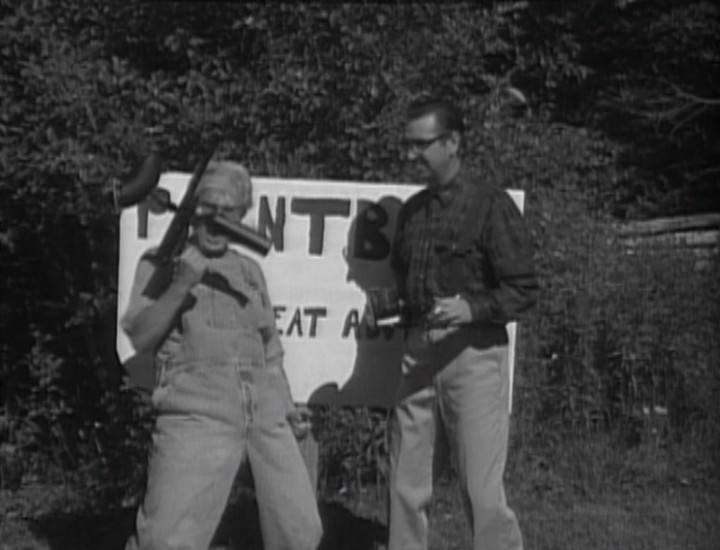 Bill exuberantly shows off his marker, ready to play. 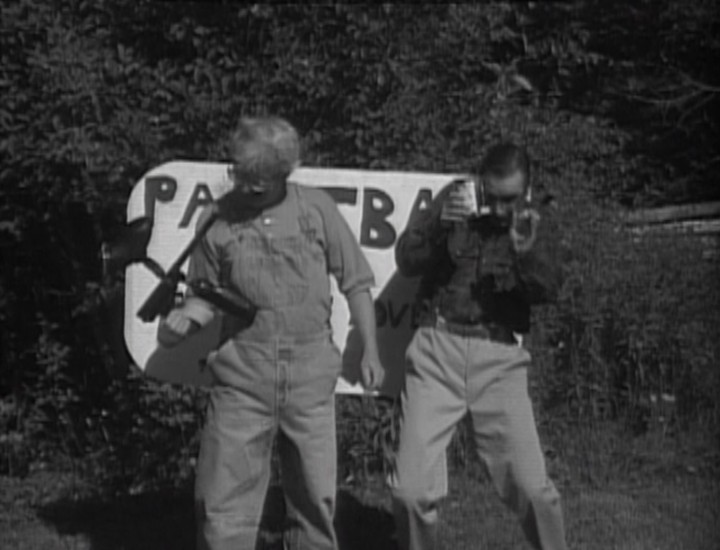 A little too enthusiastically perhaps, as he waves it past Harold's head, then looks down the barrel himself. 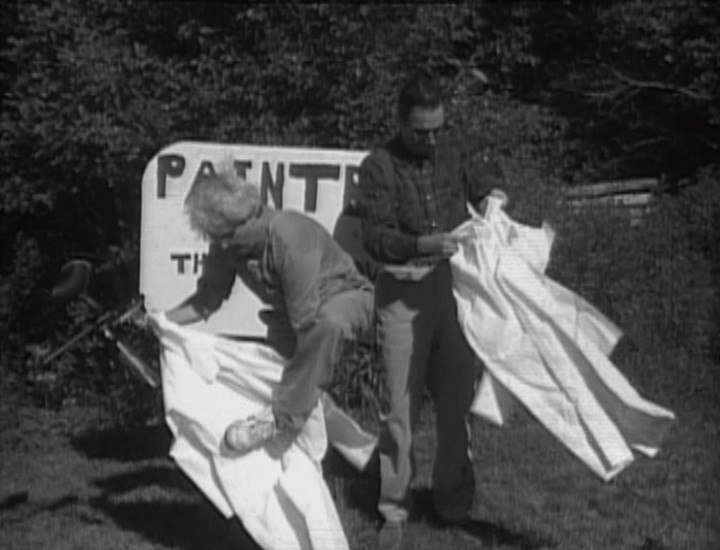 To get ready for the game, Bill pulls two pairs of white coveralls out of his overalls. (It makes sense in context. 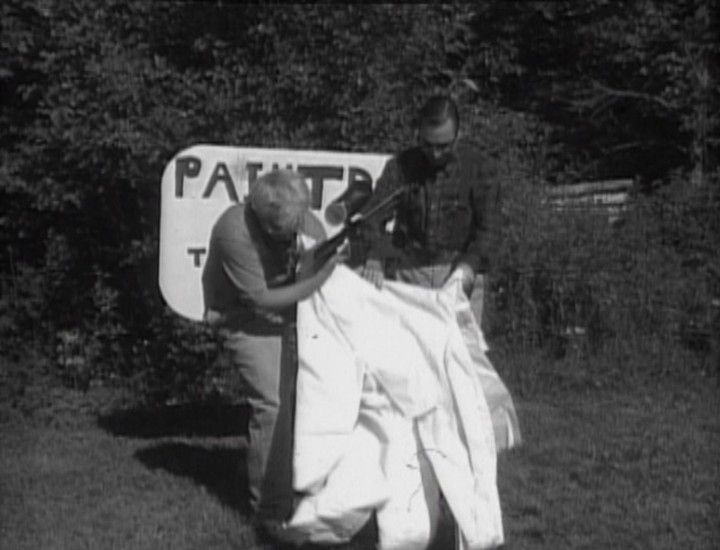 And of course, as he's struggling to put the coverall on- without putting his gun down- manages to point it at Harold again. 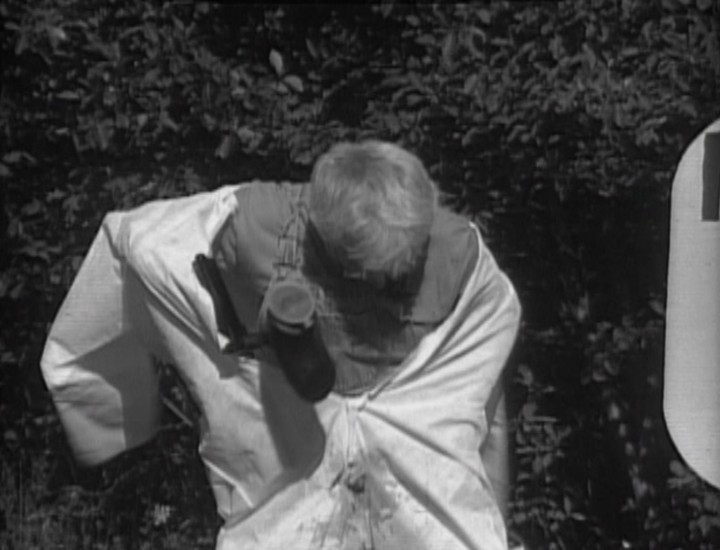 Then, jumping up and down to get into the coveralls, Bill manages to shoot himself in the crotch. 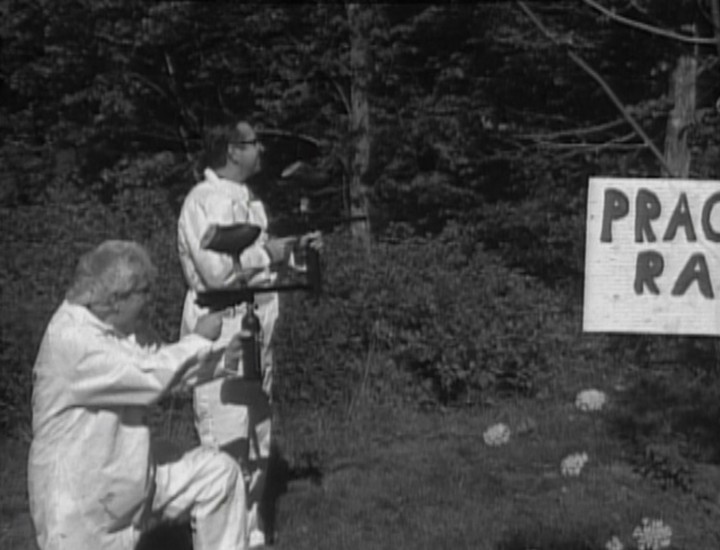 Later, at the practice range, we see both Bill and Harold firing rapidly off into the woods. 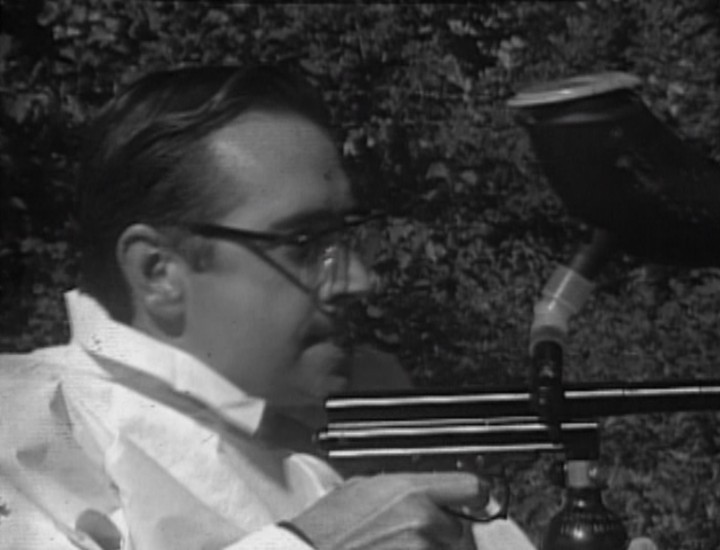 Harold with a look of grim determination.... 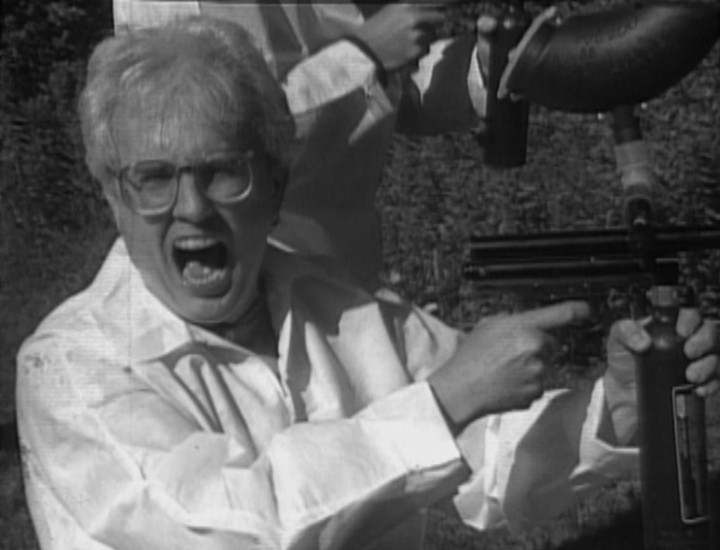 ... And Bill with a look of unbridled lunacy. 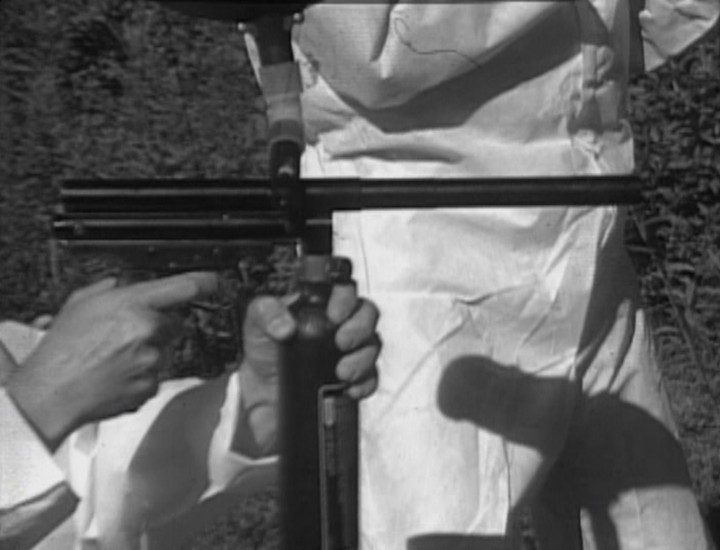 Both of them are shooting identical Kingman Spyder Compacts, each with a Viewloader VL-200 and a vertically-mounted
7-ounce CO2 tank with an on-off valve. It's hard to tell, but it appears they are actually firing paint in this shot- you can see
lighter-colored rounds in the 'window' of the power feed neck. 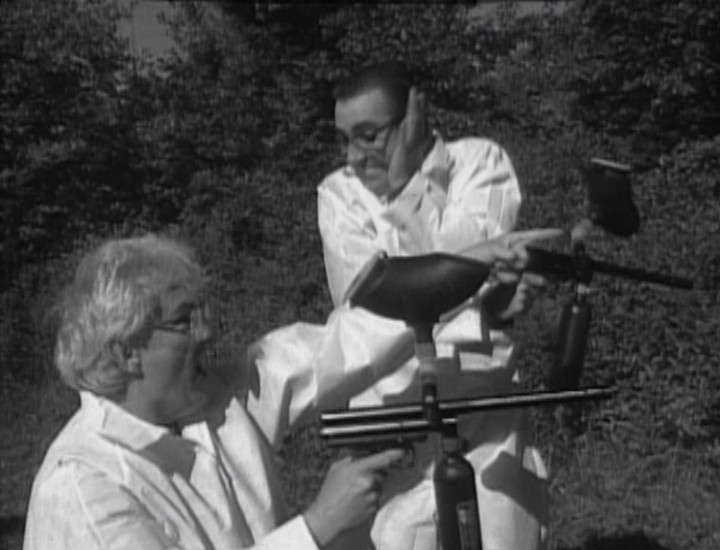 Bill then indicates they need to go up and look at their targets. 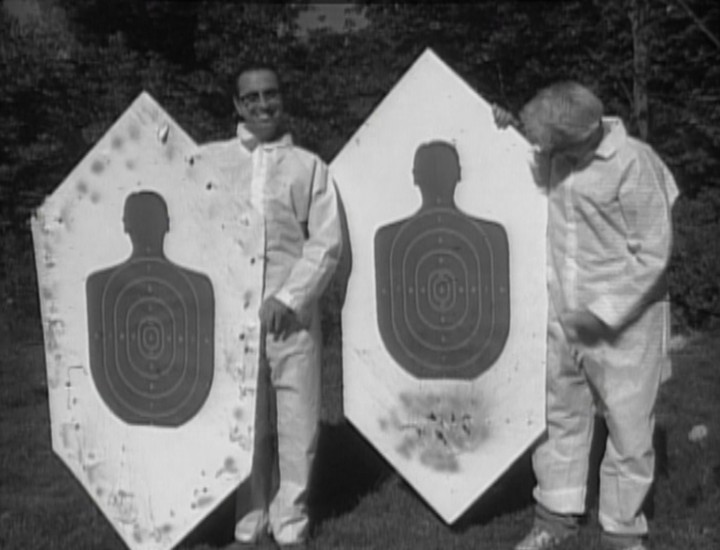 Harold, it turns out, has neatly missed the entire silhouette, while Bill appears to have aimed on at his target's crotch. 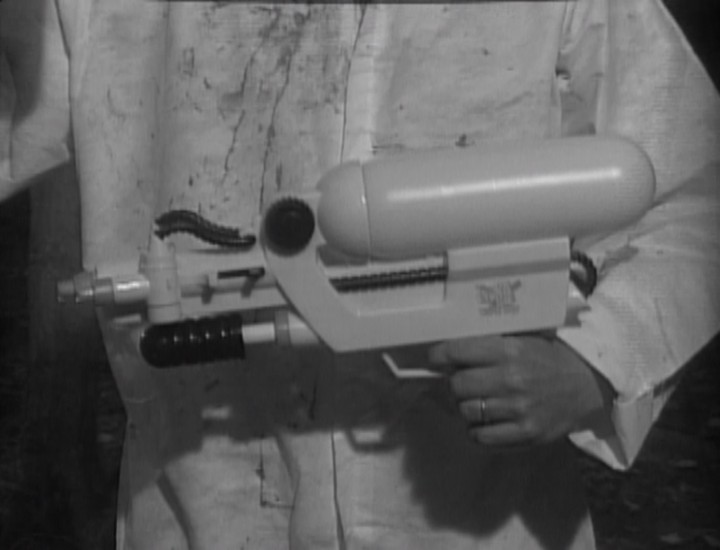 Once the game begins, after a brief James-Bond-esque down-the-barrel shot, Bill, blinded by paint, runs into a tree and
knocks himself loopy. We then see a Rambo-like "arming up" montage, where Bill fills water balloons and a Super Soaker
with paint, straps on some spray-cans as a bandolier of "grenades... 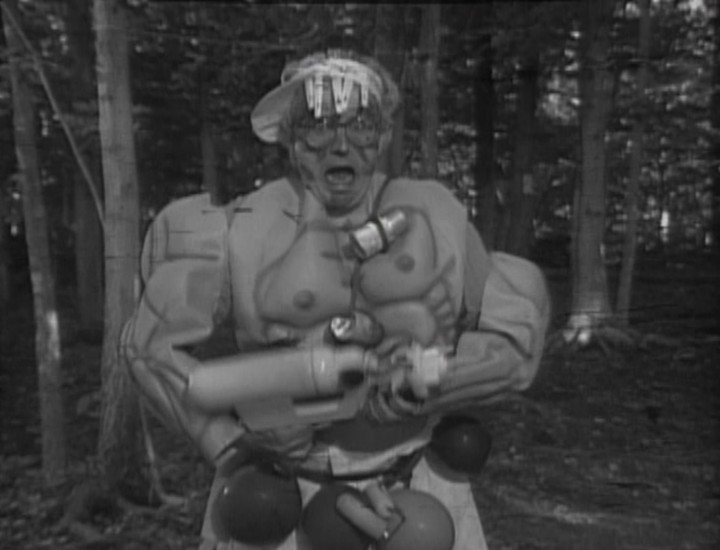 And apparently a bad muscle suit.

Also note the paintbrushes tucked in his headband. 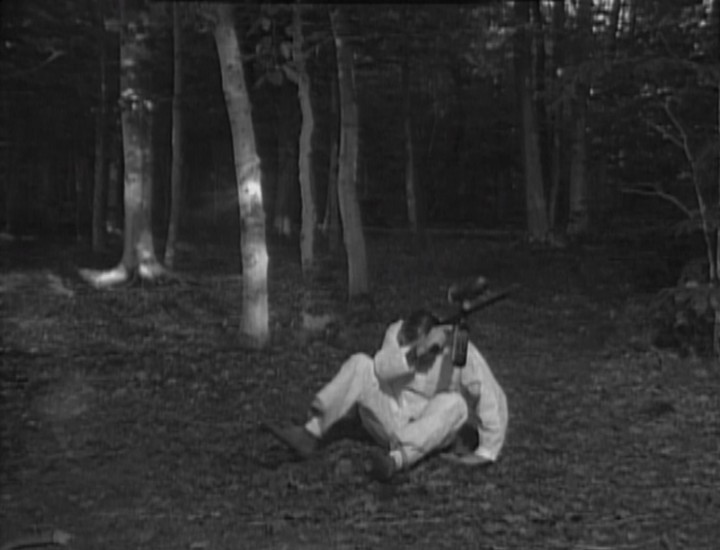 Harold tries to run away, but is confronted by Bill's superior firepower. Bill first tosses one of the small spray cans as a
grenade, which knocks Harold off his feet. Before he can get up, he's fired at with paintballs (note the spray coming off
the near tree, right at the bright spot.) 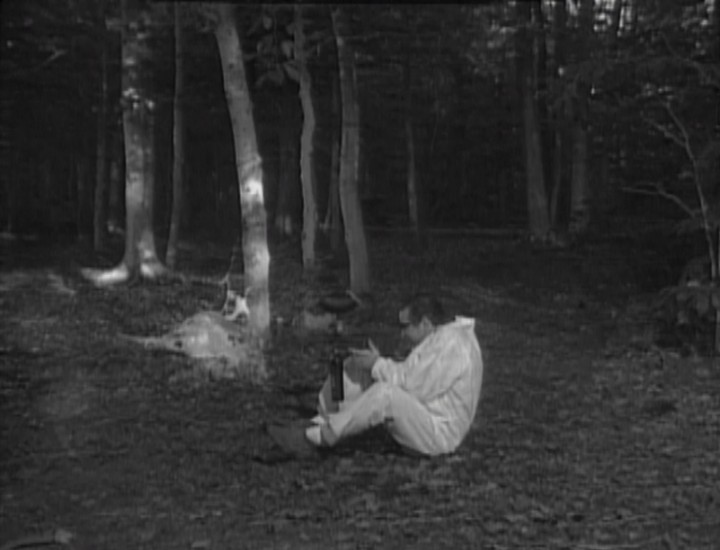 Then assaulted with water-balloon grenades (note the splash at the base of that same tree.) 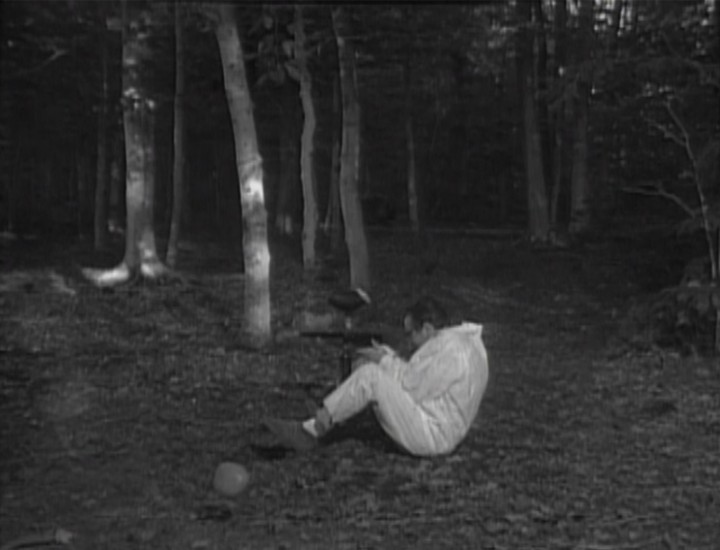 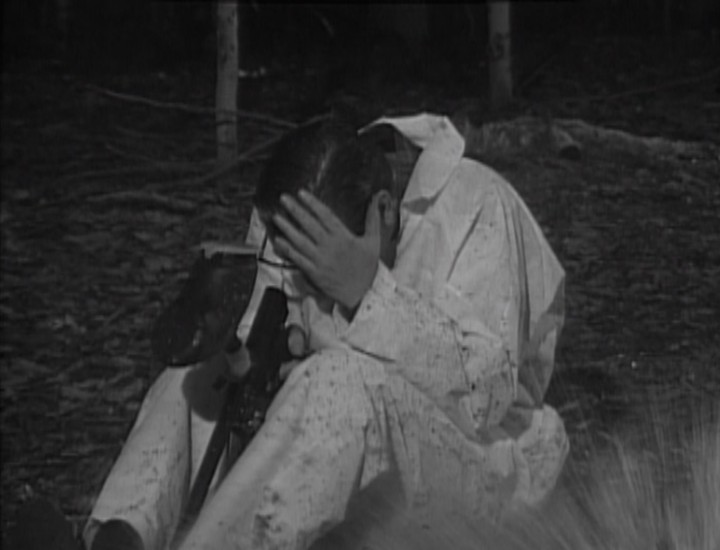 Which blow up right next to him- note that at no time do either of them have any face or eye protection. 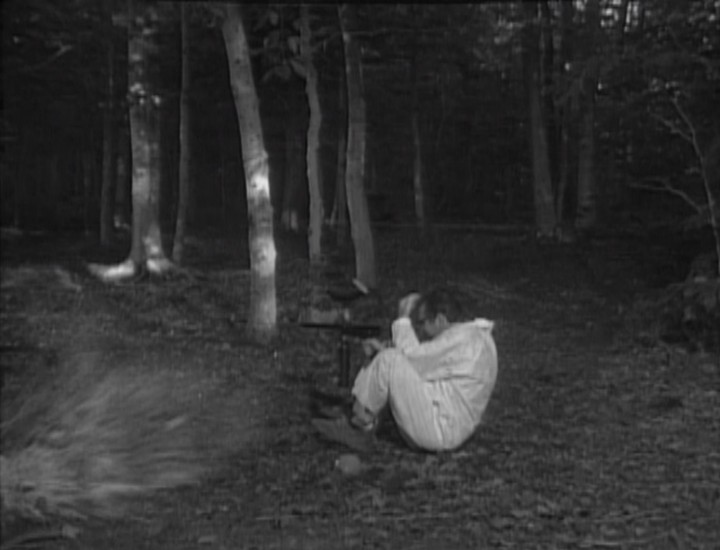 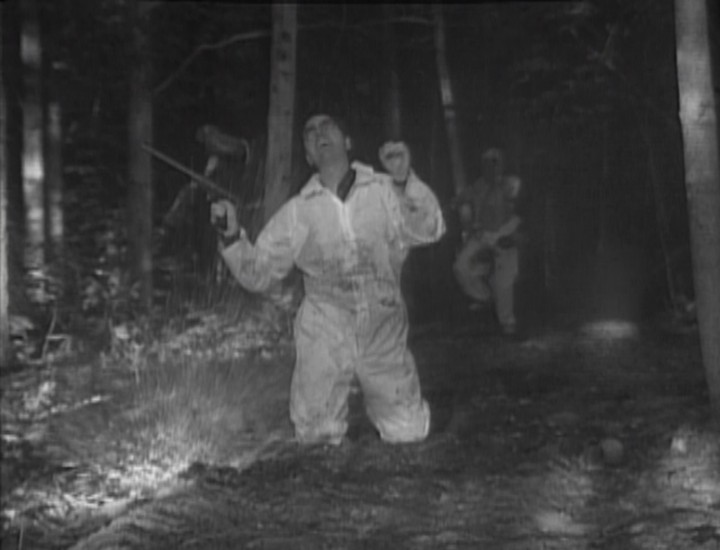 Finally, he gets up to run, only to be cut down, Platoon style, by Bill. Bill then trips and falls, coming right back up completely
back to normal. (As in, without the muscle suit, headband, extra weapons, etc.) 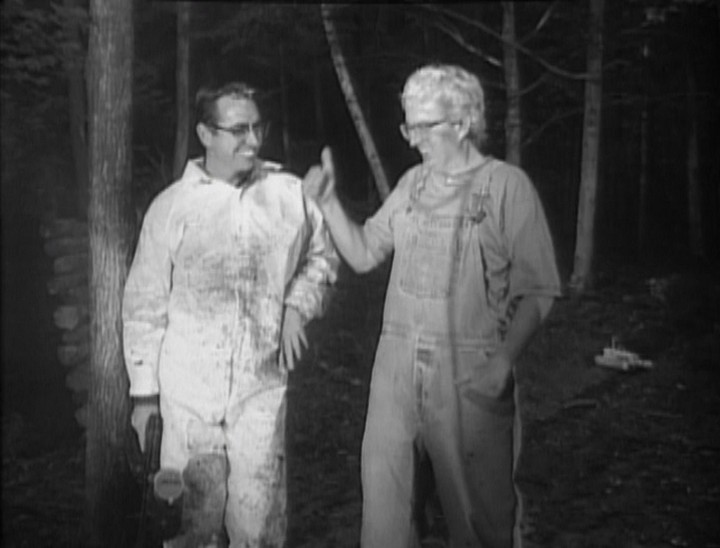 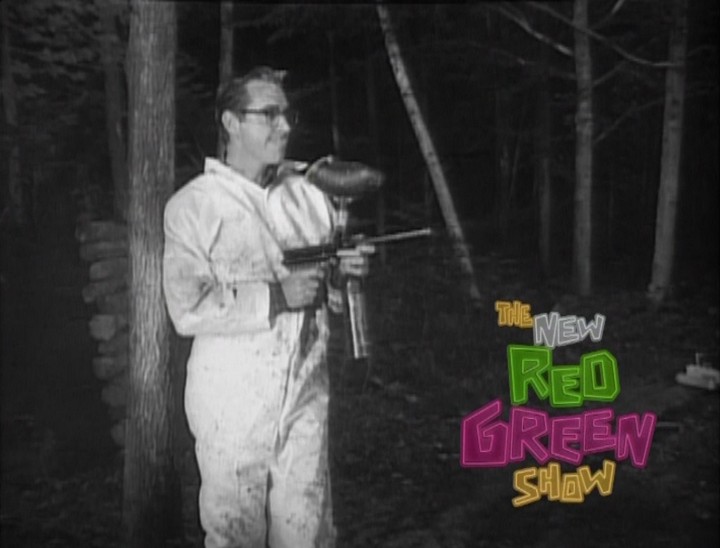 BLAT! Nope, no hard feelings at all.