The film Johnny Mnemonic, with Keanu Reeves (1995) actually features quite a few paintball guns, probably at least in part to make a
"futuristic" gun, and in all likelihood, in part due to filming taking place in Canada. 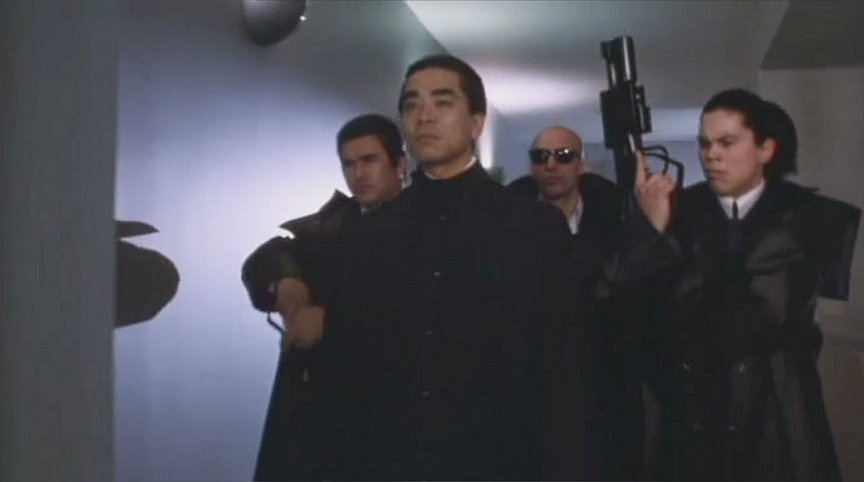 Shinji (Denis Akiyama) shows up with some goons. The goon on the right is readying a Sheridan VM-68 (note the handguard) with a short barrel,
large shroud over the front half of the body, and a 3.5 ounce tank. The goon at the left, rear, has one as well. 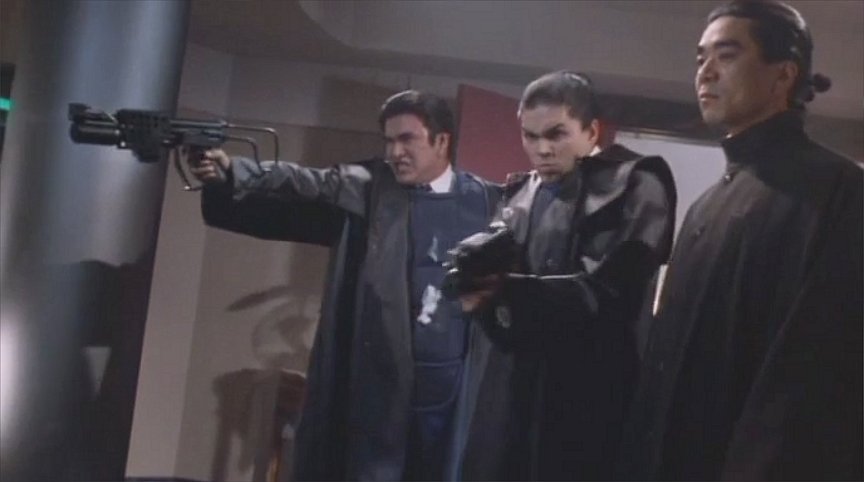 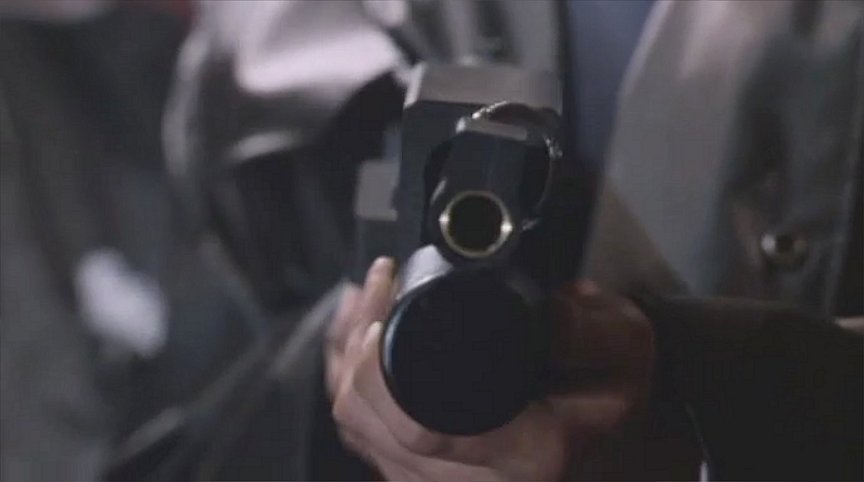 A front view. The module with the wires on the end of the cut-down brass barrel is a xenon-tube 'flash' arrangement, as several frames of the
shootout scene show a bluish 'flash' illuminating the CO2 gas column coming from the barrel. Muzzle flashes are seen, but they're clearly
post-production special effects. 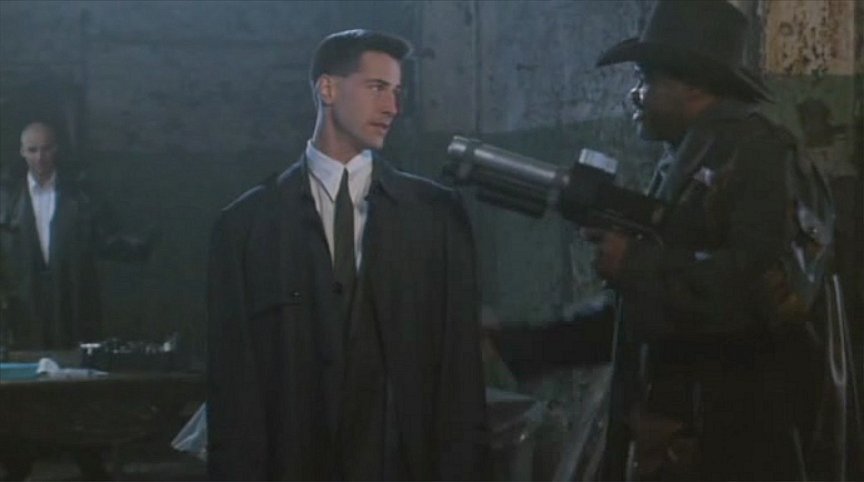 Afterward, Johnny is waylaid by two goons- 'Baldy' from the apartment and this guy, threatening him with a Gotch-Ya Deuce double-barrel pump,
made up with a large housing over the body, and a long 10-ounce tank mounted above the barrels. 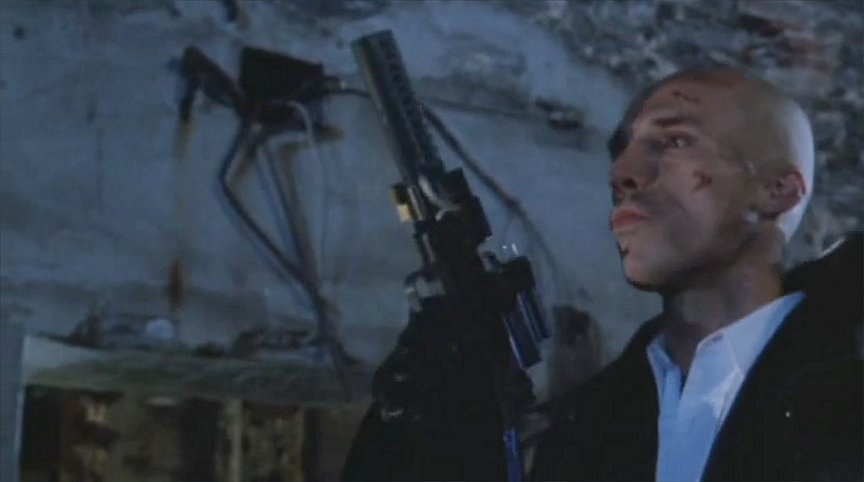 After escaping, Johnny is chased by Baldy, with a heavily modified Pneumatic Design Storm. The foregrip appears to be from the Storm,
albeit milled or sanded somewhat smoother. While much of the rest is unidentifiable junk, the sight at the top is clearly an Armson Pro-Dot. 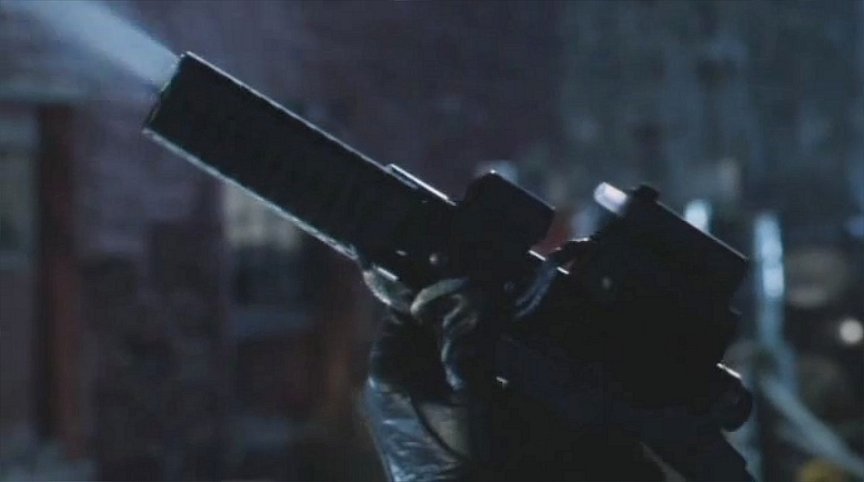 Note the gun appears to be actually firing CO2, as several "puffs" are seen in this take. 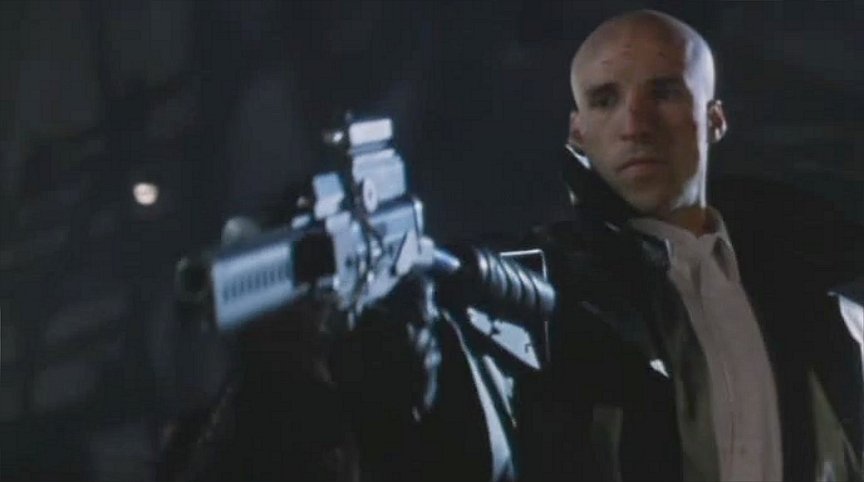 A somewhat better shot of all the acoutrements: Armson sight, squared-off foregrip, and a clear view of the 7-ounce backbottle CO2 tank,
covered by a plastic TASO "Nice Butt" slide-on shoulder stock. 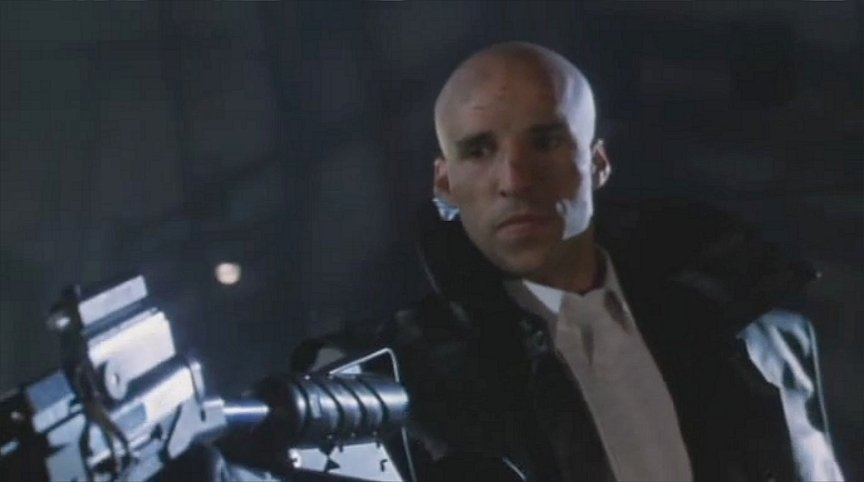 A slightly better view showing the distinctive shape of the Storm ASA- also note the (uncocked) cocking knob and slot just ahead of Baldy's thumb.
The blue tube attaching the tank to the gun is a "Fast Draw" assembly, allowing a player to remove a tank with a quarter turn. 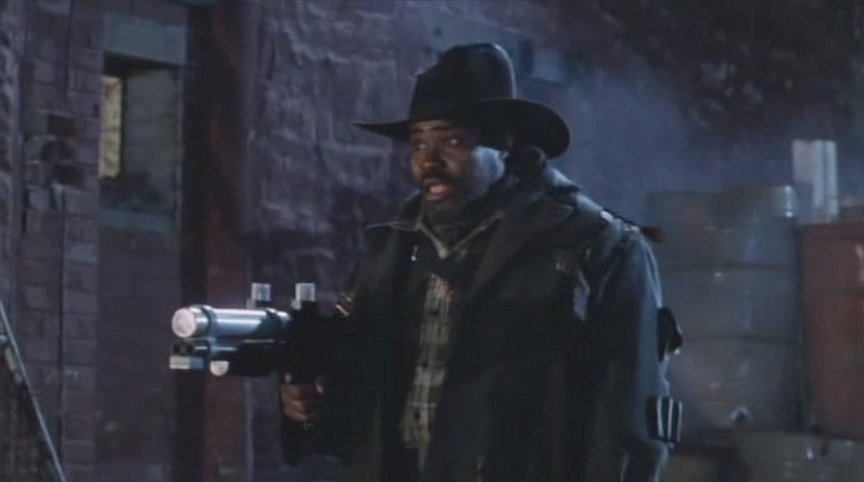 The goon in the cowboy hat reappears just long enough to show us the Deuce again, and then take a knife to the chest. 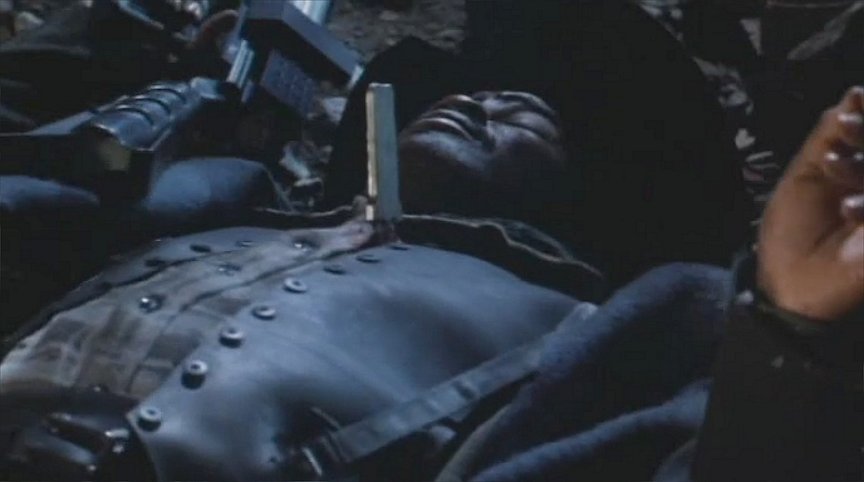 The Deuce, too, turns out to have a 7-ounce CO2 tank and 'Nice Butt'. Note the two short "feed tubes" that appear to lead to the marker's
actual feed necks. 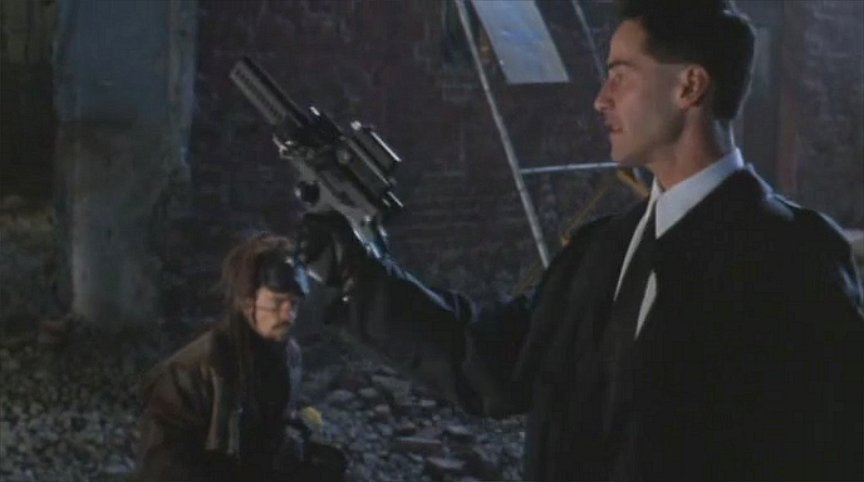 Johnny picks up and strips down Baldy's gun. He first removes the tank and buttplate with a quarter-turn (no gas escapes, of course, it's a prop)
then slides off the foregrip and begins unscrewing the barrel. 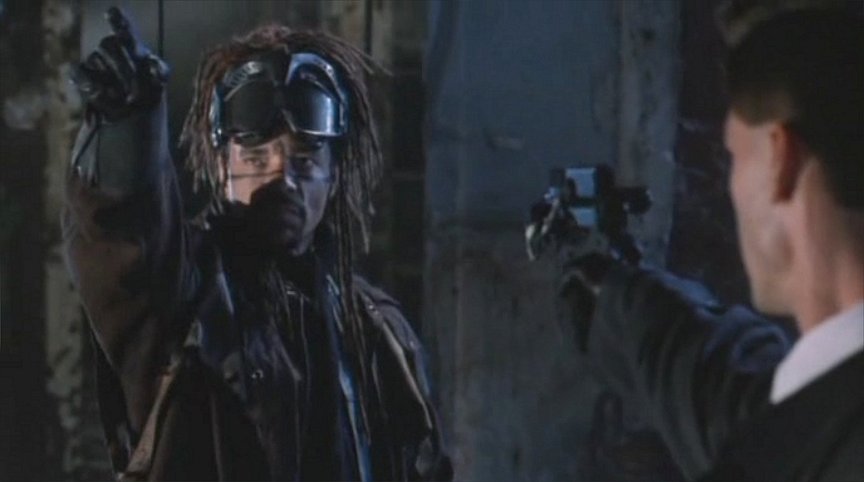 J-Bone (Ice-T) appears, wearing a pair of JT Elite goggles, with part of the lower portion of the mask cut out and mounted
upside-down to the top of the goggle frame. 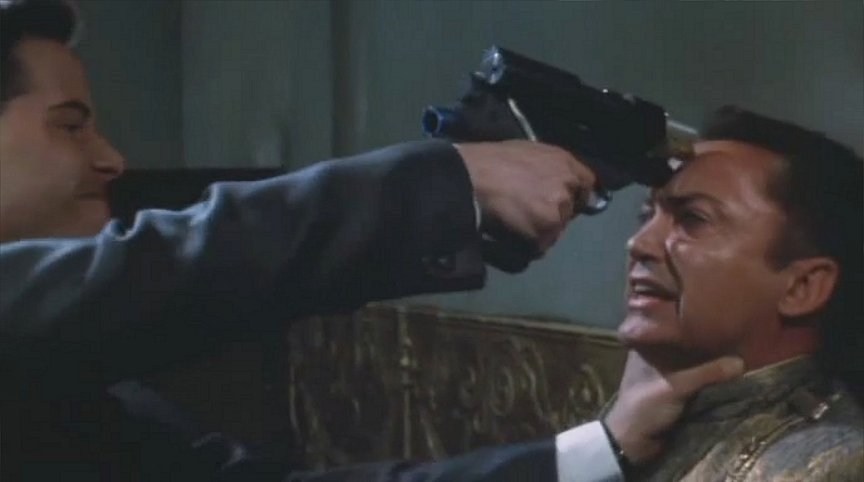 Johnny threatens Ralfi (Udo Kier) with the now-stripped-down Storm. Note the blue Quick draw piece at the back. 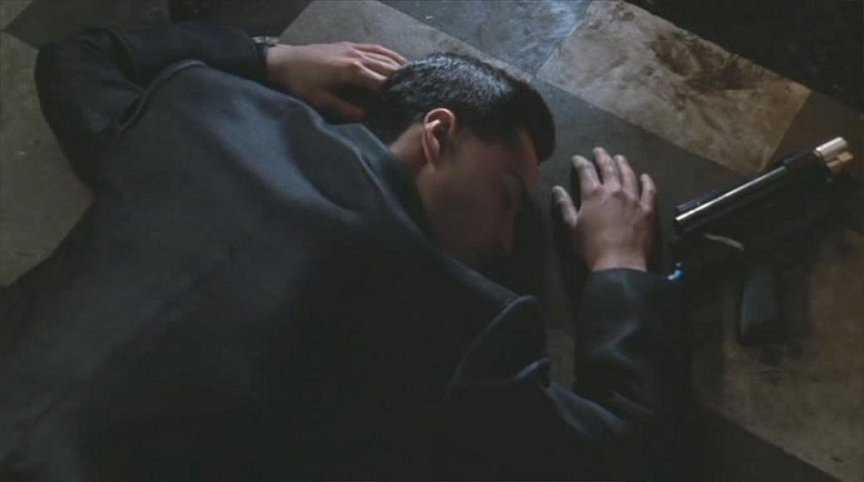 Johnny gets conked unconcious. Note the factory "Lone Star" grip on the Storm. While it's not clear, the silver cap at the front may be part
of a gas chamber, with the brass fittings below feeding back to the gun. Possibly similar to a 12-gram changer. 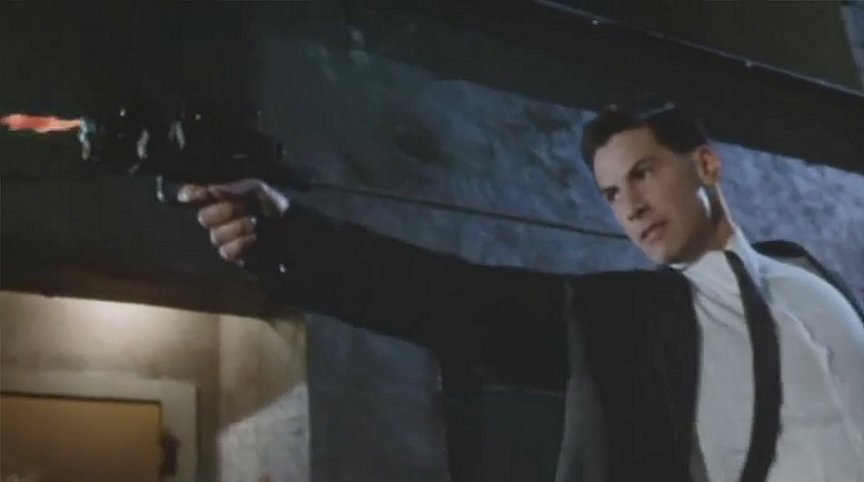 And here's why: In this take, the gun actually produces a brief and weak but definite flame. The object noted above may be a small storage tank
for a fuel gas, ignited by a "spark plug" type arrangment contained in the rest of the dressing. 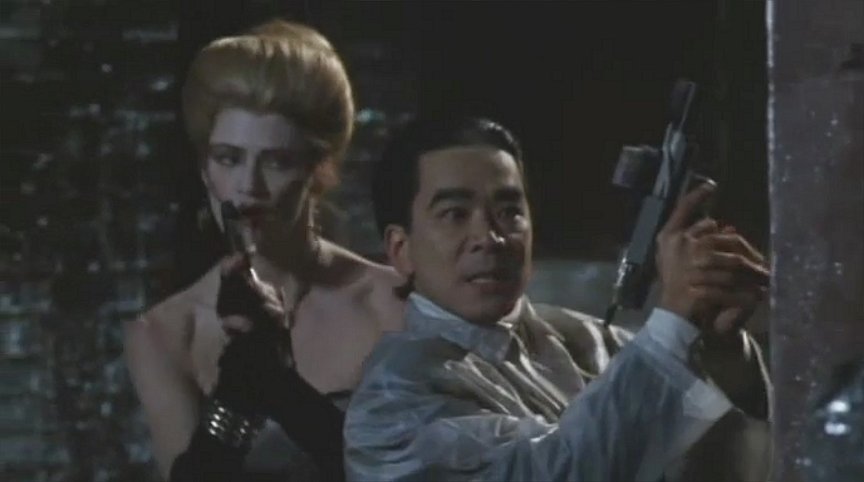 Shinji reappears with a modified AirGun Designs 68 Automag. The barrel is shortened and given the same "flash" assembly from the VM-68s earlier.
And while not seen here (and only poorly seen elsewhere) there's a 12-gram changer mounted sidesaddle on the opposite side of the body, with a
short grease gun style hose looping around the back to connect it to the Automags' AIR Valve. 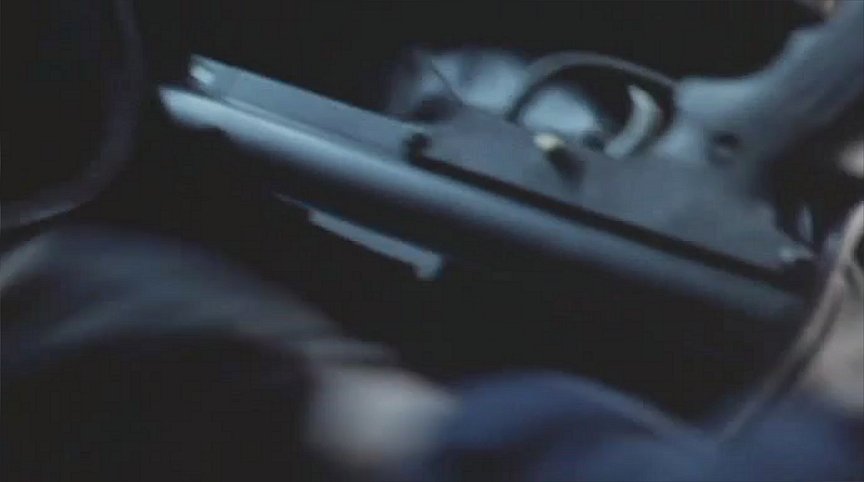 Later, as Shinji and more goons prepare to assault J-Bone's hideout, one of the guns they pull out is this Tippmann Pro-Lite. 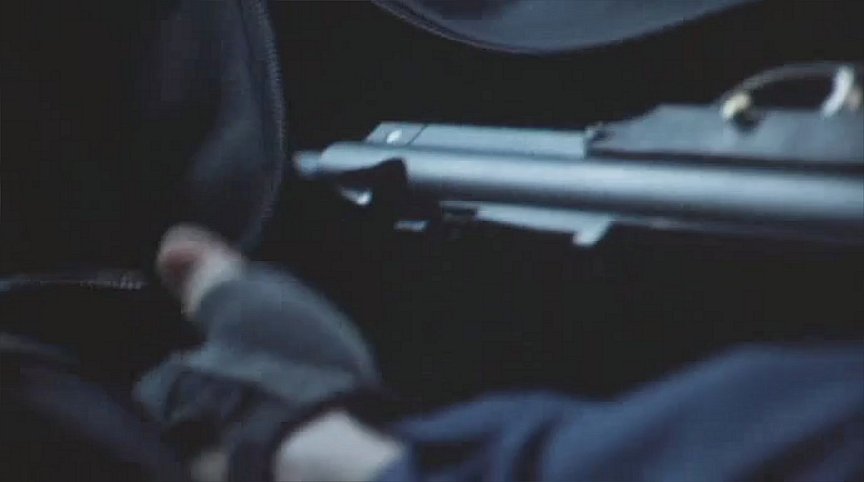 It's complete, unmodified and unadorned, other than the slide-on foregrip/feed neck has been removed. 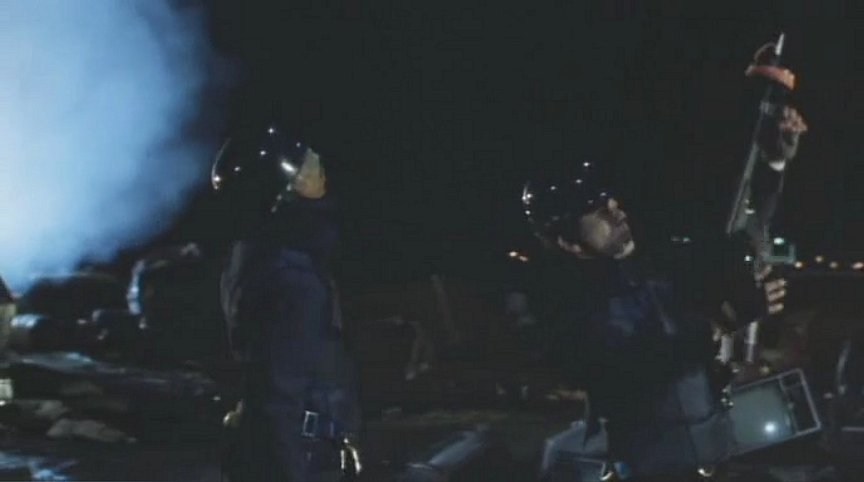 A few moments later, a lieutenant goon hands Shinji another Tippmann Pro-Lite that has been made up into a grappling cable launcher, simply by
adding a clamp-on vertical foregrip and a cable spool. 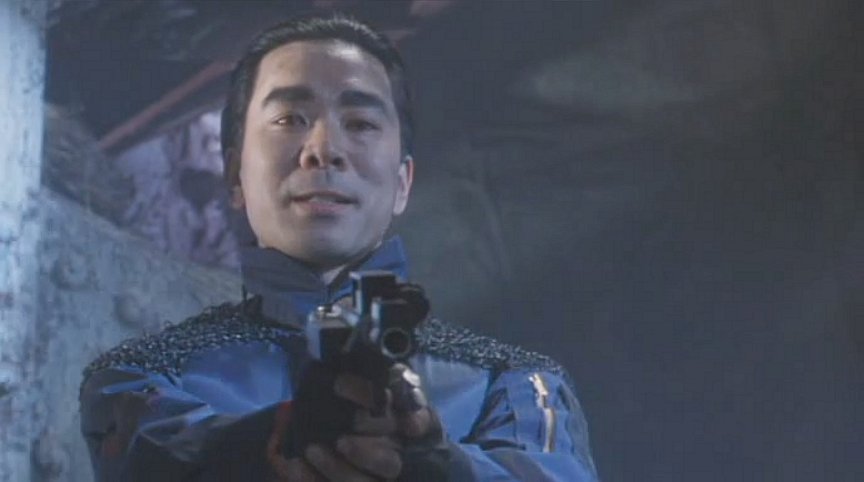 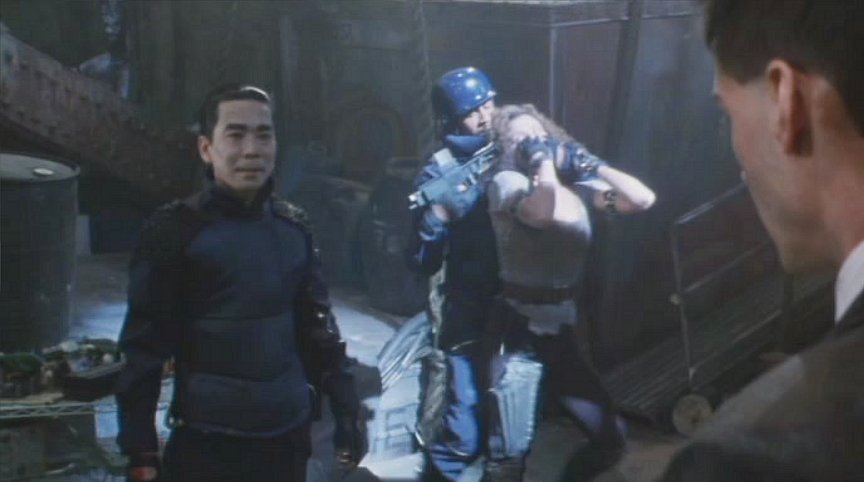 While yet another goon holds Jane (Dina Meyer) hostage with an early W'Orr Game Products Autococker. (Which does, by the way, have a barrel.) 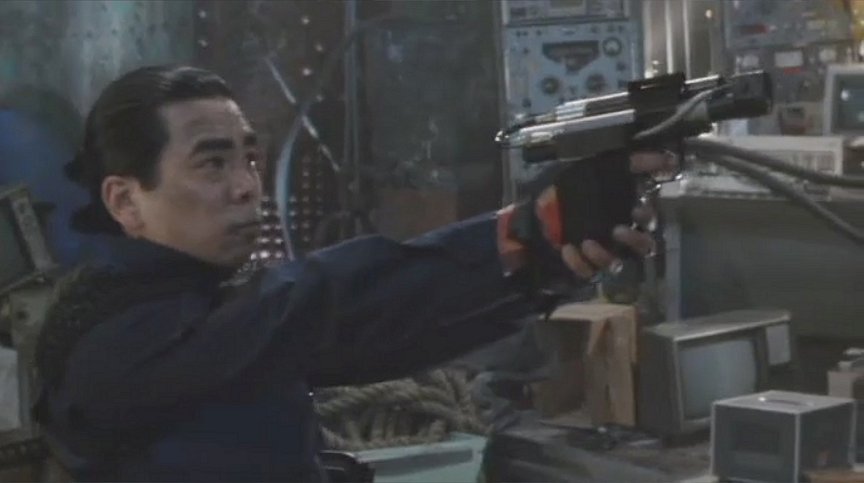 A better shot of Shinji's Automag pistol. Note the hose going around the back to the side-mounted (probably) 12-gram changer. 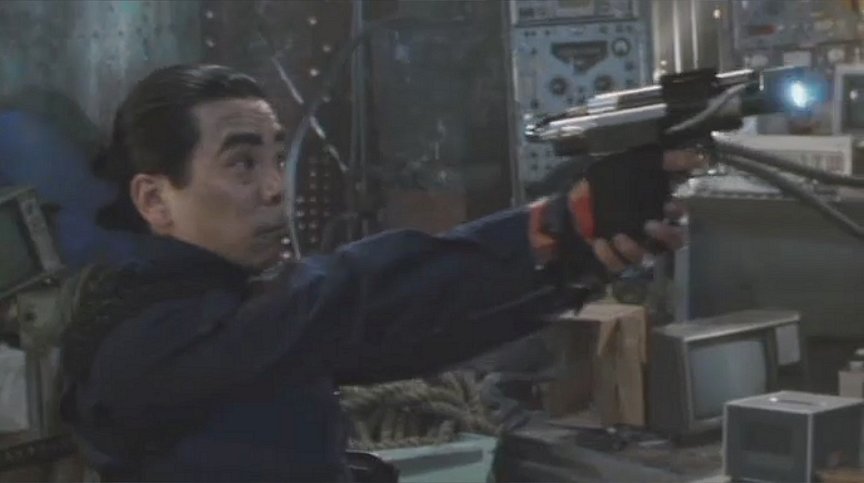 And here we finally see the flash unit in action. It was probably supposed to illuminate the gas column coming out of the barrel, or might be just
an indicator showing the post-production SFX crew when and where to insert a muzzle flash. 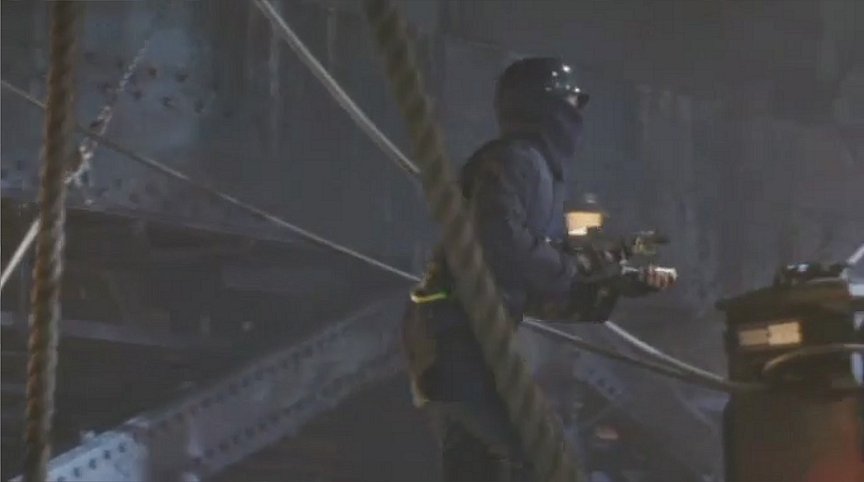 Meanwhile, elsewhere, random goon #26 clubs one of J-Bones' crew with another Autococker, this time fitted with a forward-facing 3.5 ounce CO2 tank. 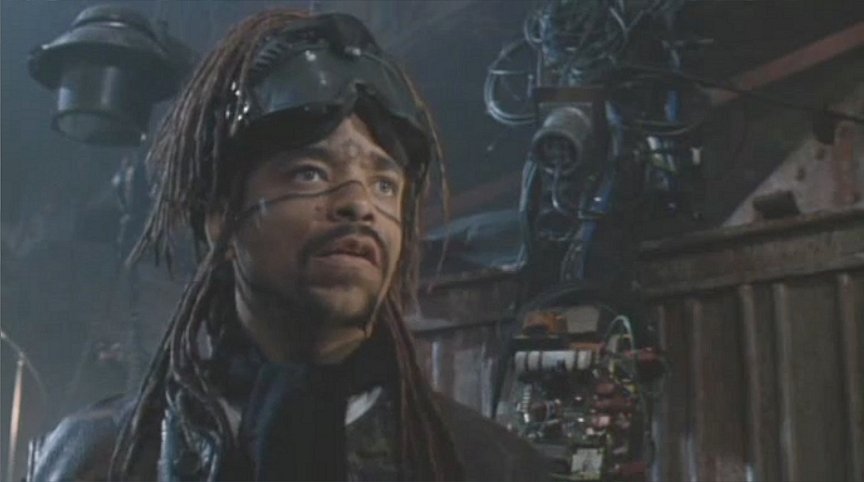 And a last shot of J-Bones' JT Elites with that goofy upside-down nosepiece.