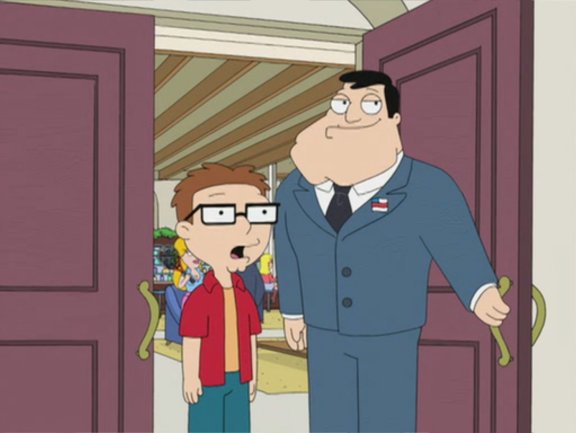 In order to help Steve (voiced by Scott Grimes) learn to sing the Star Spangled Banner better (it makes sense in context)
Stan (voiced by Seth McFarlane) takes him to the Langley Falls Country Club, where once a month his "NRA buddies"
rent the golf course for reenactments. And so right outside the door of the club... 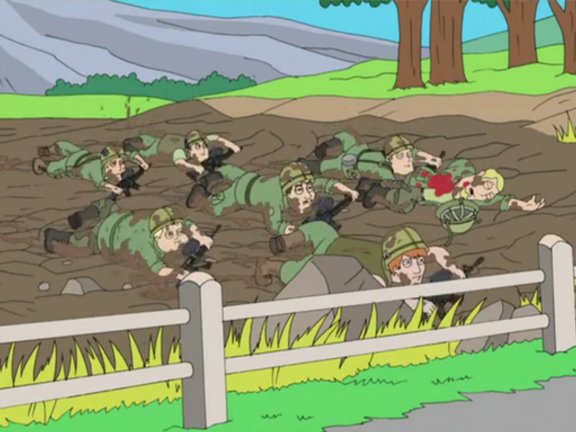 ... We see it's a Vietnam War reenactment. No goggles, the guns look like M-16s (although with
hoppers) and eliminated players remain laying where they're "killed". 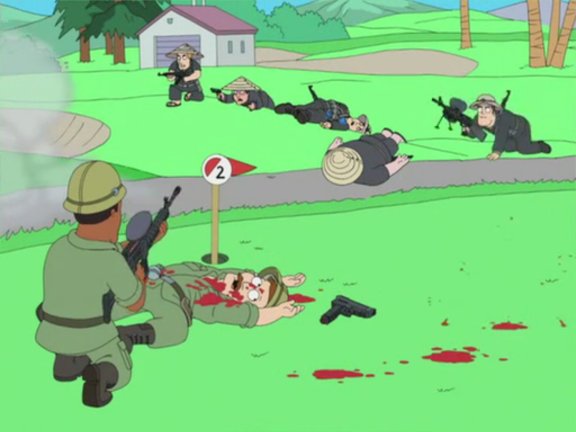 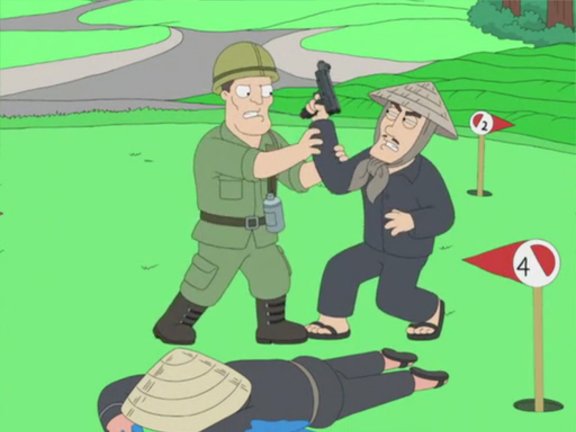 While they get occasional details right- the pistols do look somewhat like a Tiberius 8.1- it's clearly more
for the humor than accuracy. And of course they parody about half a dozen war movies too. 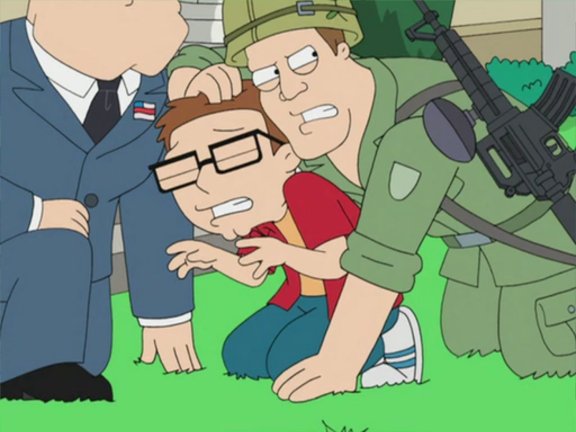 As soon as Stan and Steve arrive, a "soldier" rushes up and yells "get down!" as several nearby
soldiers are "mowed down". He then tells them "You in Vietnam, bitches!" 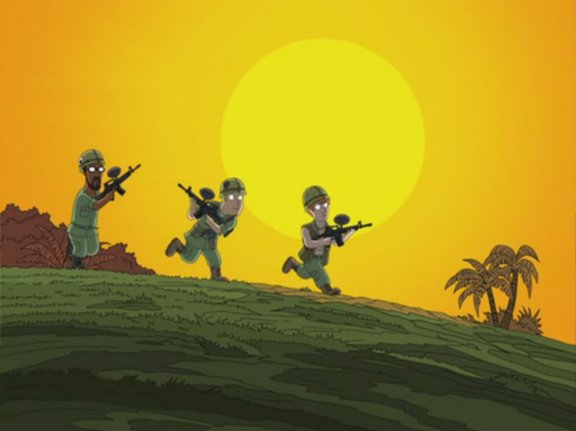 Most of the action parodies scenes from Vietnam War movies. 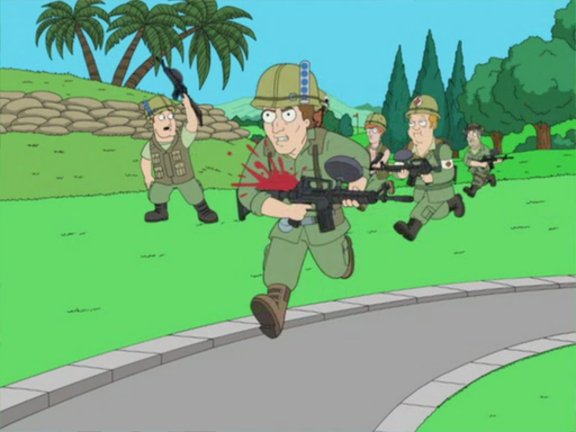 Note these two guys have extra tubes of paint tucked in their helmet straps. 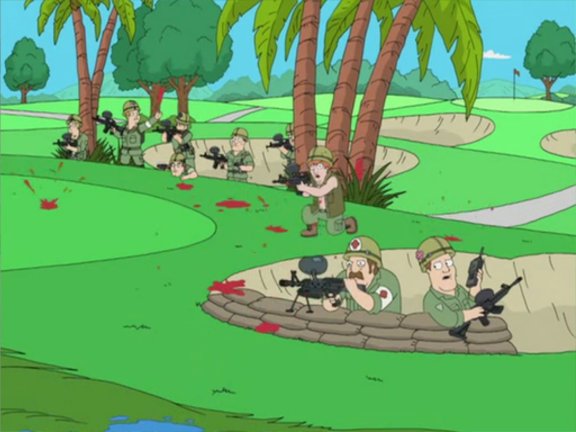 Sand traps as foxholes, radios, "belt-fed" weapons... Heck, I'd love to play there myself. 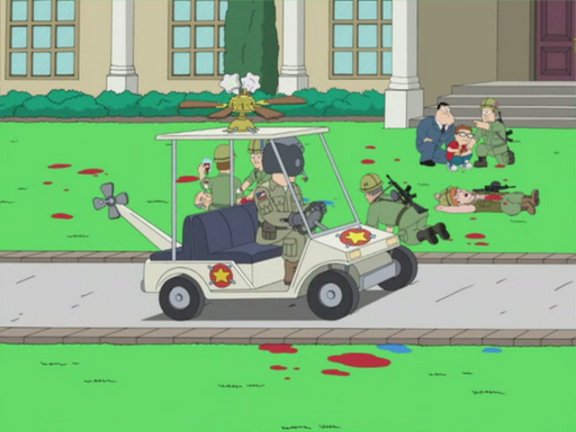 The 'soldier' that met Stan and Steve at the beginning, now tells them "this chopper will take you
to base camp!" The 'chopper' is of course a golf cart, with a ceiling fan bolted to the roof. 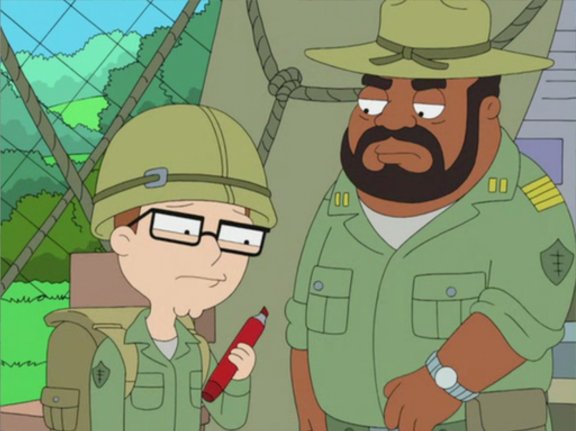 Once at base camp, Stan 'volunteers' Steve for night watch, and the ... Sargeant? gives him his
"lucky machete" (a permanent marker) and says to "keep it in the sheath so it doesn't get dull."
(And then whispers 'keep the cap on it so it doesn't dry out.') 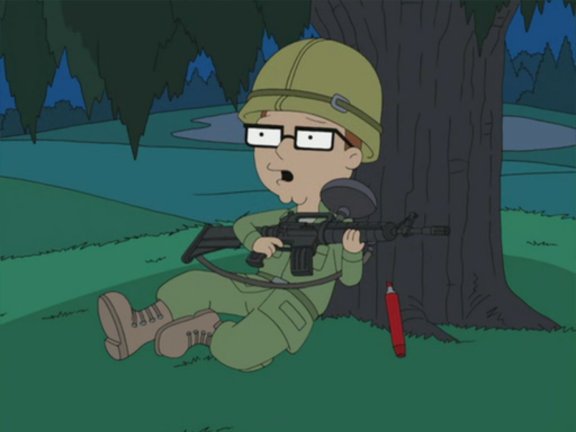 On guard duty, Steve cradles his rifle. There's several markers... er, paintball guns, that accurately
copy the M-16, so other than the total lack of goggles, and the fact that none of the hoppers seem
to have a lid, this isn't a bad representation. 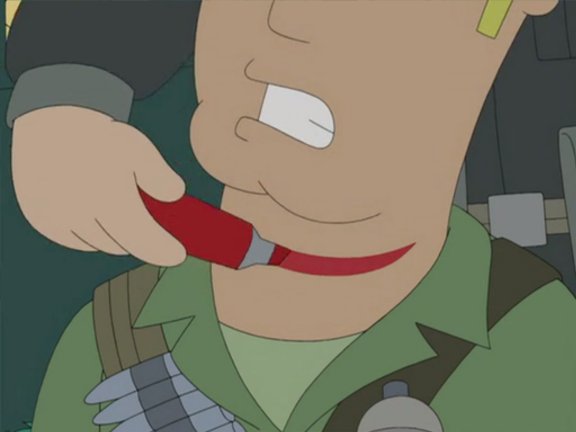 After Steve falls asleep on guard duty, the "Viet Cong" attack the base, and "kill" several
prisoners by "cutting" their throats with permanent markers. Steve's dad is captured. 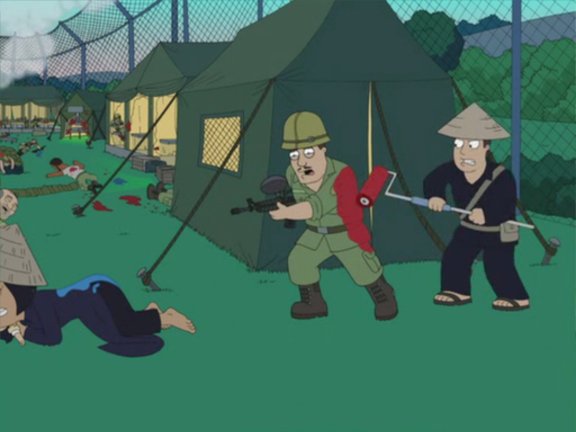 During the battle for the base, a "GI" "murders" a woman and baby (a sleepy doll) and is
in turn killed by "Charlie"... using a roller. 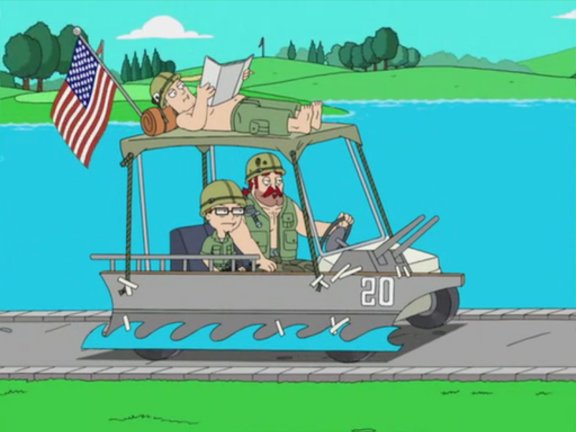 Steve and two others, being the only survivors, headed up "Fanangong River" towards "Gobbeldygoo Bay" (in
a scene parodying Apocalypse Now) to rescue Stan, who is being held at "Nangangbang." (The caddy shack.) 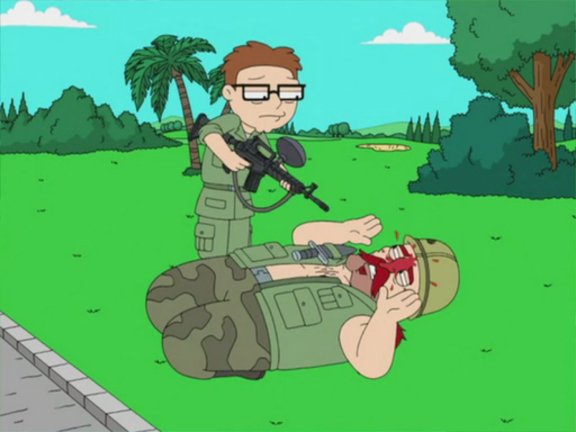 As they were driving along (sailing along?) someone throws a pine cone (hand grenade) which
"blows off" Red's legs. He demands that Steve "take me out!" ("Not the face, not the face!") 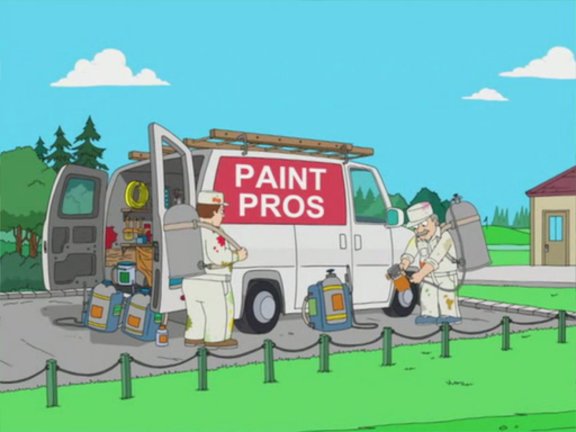 Now completely alone, Steve has to rescue his dad from a heavily fortified caddy shed.
Luckily he notices these house painters working on one of the other outbuildings. 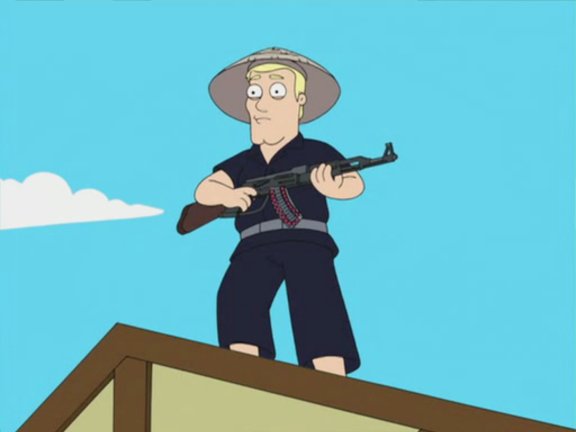 As Steve assaults the shed, the other players react in surprise- note the rows of paintballs
shown in this guy's "AK-47" magazine. 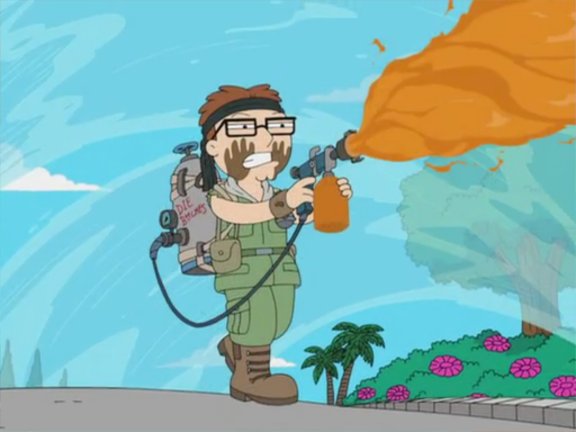 Steve assaults the shed with a pressure sprayer full of orange paint, hosing everything
down as if with a flamethrower. 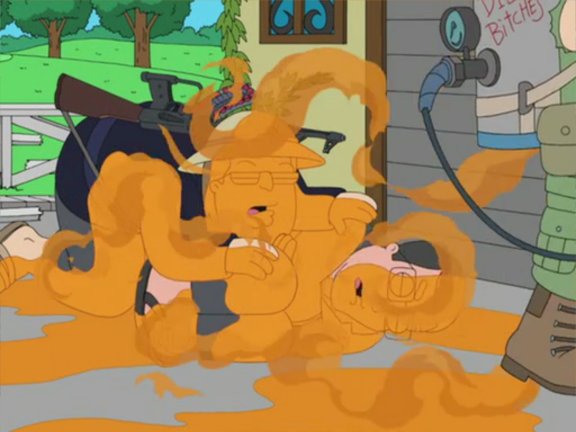 His opponents, thoroughly painted, are left coughing and gasping from the paint fumes.
Note, again, the paintballs shown in the clear AK-47 magazine. 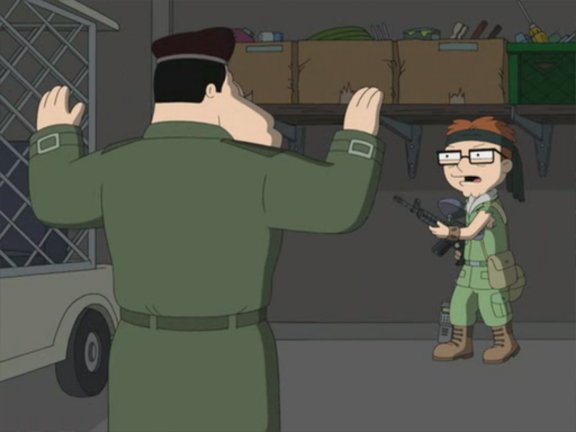 Later, after the rescue, Steve is left with a sort of post-traumatic stress disorder, and goes back to the
golf course. Stan has to talk him out, in a scene parodying First Blood right down to the coat and beret.